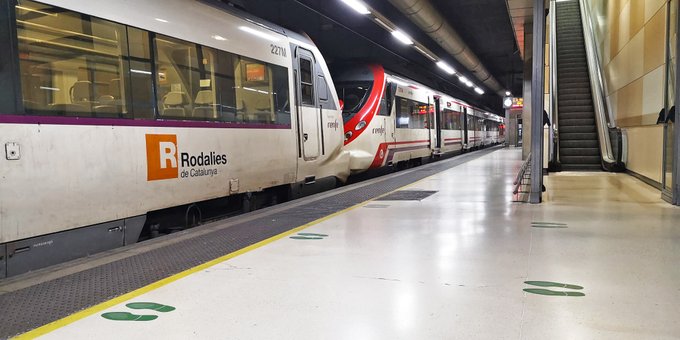 All Rodalies short, medium and long-distance trains in Catalonia were ground to a halt for three hours between 5am and 8am on Friday morning, after a ‘failure in the general communications system’ of Adif, Spain’s state-owned railway infrastructure manager.

The breakdown affected all services except for high-speed trains.

‘The circulation of all trains is suspended due to an incident in the general Adif communications system. We recommend using alternative transportation,’ Rodalies posted on Twitter in the early hours of the morning.

‘Circulation is gradually being restored in the Barcelona area, for both Rodalíes trains and medium-distance and long-distance trains,’ Adif posted just after 8am.

Talking to RAC1 radio station, Spanish Transport Minister Raquel Sánchez said that normality would ‘take hours’ to arrive and added that ‘this has never happened before’.

A few minutes after 8am passengers were allowed on the platforms for the first time on Friday, but trains will still run with major delays.

Adif said that ‘the incidence had taken place this early morning coinciding with the process of updating the IT systems of the Centralized Traffic Centre, which are carried out regularly.’

‘During these operations, some damage in the IT systems that control the communications has been identified, both the main and the redundant ones.’

The Catalan government’s vice president, Jordi Puigneró, reacted to the news on Catalunya Ràdio, saying that ‘commuters want Rodalies services to work, not for it to be free’. ALSO READ: Free train tickets now available in Spain for travel between 1 Sept-31 Dec – full details.

Puigneró demanded that the management of the train infrastructure be fully transferred from the Spanish to Catalan administrations, which has been a long-standing demand of the Catalan government.

Filming of Netflix ‘The Crown’ in Barcelona suspended ‘out of respect’