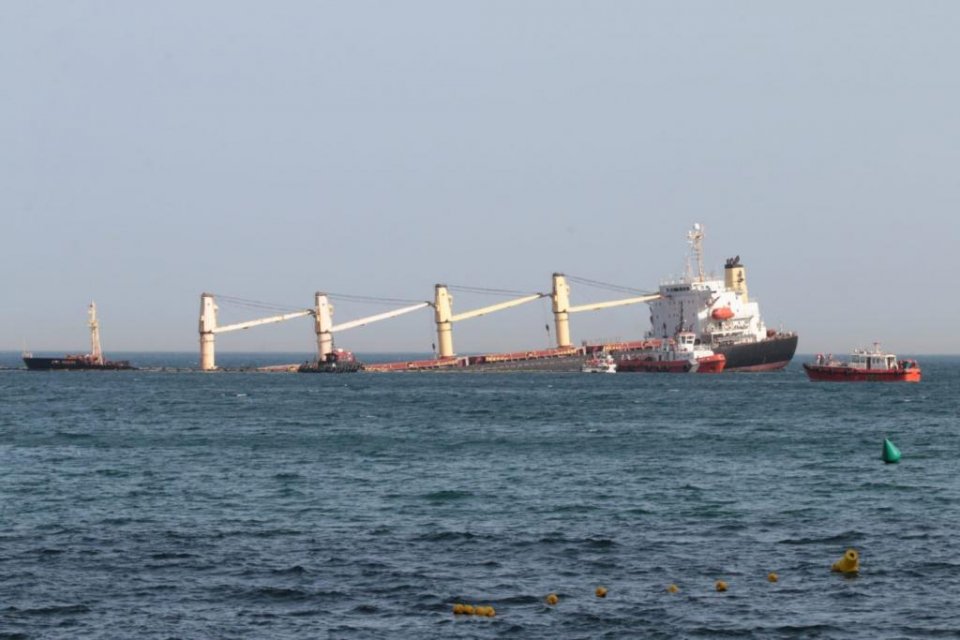 Gibraltar authorities said on Friday that 80% of the diesel from a damaged and partly sunken bulk carrier ship has been removed, but that some 180 tons of heavy fuel oil is still on board.

The 178-metre, Tuvalu-registered OS 35 vessel, carrying a cargo of steel bars, left the Bay of Algeciras for Vlissingen in the Netherlands on Monday and collided with Adam LNG, a ship flying under the flag of the Marshall Islands.

Water entered the ship, which eventually broke down on Thursday afternoon and began leaking oil. The OS 35 was carrying around 500 tons of fuel, but the ship’s cargo was not oil. The leak is of its own oil to be used for the journey.

The LNG carrier with which it collided sustained little damage. No one was injured in the collision.

On Thursday authorities began pumping the fuel that was controlled by a floating barrier – known as a ‘boom’ – that was placed around the ship following the discovery of the leak.

A government spokesman said there had been no further seepage of heavy fuel since Thursday and that the situation was under control.

The spokesman, who was not authorised to be named publicly, said the ship had been carrying 250 tons of diesel and still had 183 tons of heavy fuel oil and 27 tons of lubricant oil in its tanks.

The heavy fuel oil is potentially more damaging to the environment and more difficult to extract, raising concerns in Spain and Gibraltar for marine life and tourism in the area.

The spokesman said there may be an announcement later on Friday as to when salvage will begin working on removing the fuel.

An aerial photo of the stricken ship showed a slick on the outside of the booms placed to contain it. Officials in the nearby Spanish town of La Linea said they would study legal action if the oil reaches the coast.

The environmental impact or the quantity of oil spilled was not immediately clear. Divers sent to the ship have already sealed the source of the leak.

The usually busy port of Gibraltar remains closed, but the neighboring Algeciras port in Spain is fully operational.

The captain of the damaged ship has been detained by the Royal Police of Gibraltar for allegedly not obeying port orders initially after the collision.

Gibraltar’s Chief Minister, Fabian Picardo, referred to the captain without naming him during an interview with Spanish national broadcaster RTVE. He said he had ‘many questions’ to answer after ignoring Gibraltarian authorities in the aftermath of the spill.

Given the break in the hull of the OS 35, under the powers contained in the Civil Contingencies Act, I have declared an Emergency and a Major Incident in Gibraltar. More information: pic.twitter.com/4l0658nljO

The Fiddler of Sitges: a new competition as part of the Irish Arts Festival