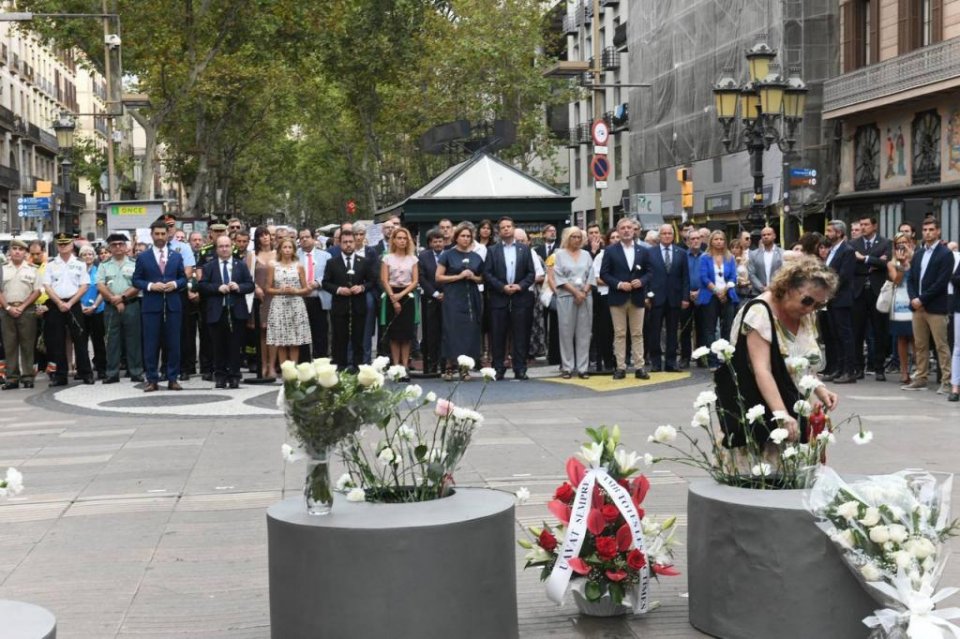 A ceremony was held in Barcelona on Wednesday in memory of 16 people killed in jihadist attacks in the Catalan city and the nearby resort of Cambrils exactly five years ago. [Click here for all our previous reports on the Barcelona Terror Attacks.]

Dozens of people observed a minute’s silence on La Rambla boulevard, where on 17 August 2017 a van mowed down pedestrians, leaving a trail of death.

As a cellist played a traditional Catalan song, relatives of the victims and officials laid white carnations in front of a memorial plaque marking the spot where the van came to a halt.

Among those attending were the president of the Catalan government Pere Aragonès, Barcelona mayor Ada Colau, and Spanish ministers Raquel Sánchez (Transport) and Miquel Iceta (Culture).

‘This date used to be just another day in the calendar. Now on 17 August you always wake up with a knot in your stomach,’ Colau told public television TVE just before the ceremony.

The attacks, which also left 140 people injured, were carried out by a cell made up mostly of young people of Moroccan descent who grew up in Catalonia. They were claimed by the Islamic State group.

The first attack took place on the famous Rambla avenue in Barcelona, where a truck rammed into passers-by, killing 14 people, mostly foreign tourists. The youngest victim was a three-year-old boy.

The driver, who had killed a 30-year-old man to steal his car while fleeing, was shot dead a few days later by the police.

Several hours after the first attack, five accomplices drove into more pedestrians and stabbed a woman who later died of her injuries in Cambrils, about 100 km to the south. All five suspects were shot dead by police.

In a tweet, Prime Minister Pedro Sánchez said Barcelona and Cambrils had ‘suffered hate and terror in their streets. ‘Five years later, we remember the victims of these attacks with our sights set on continuing to build a future of peace,’ he said.

A Spanish court in 2021 found three men guilty of assisting the perpetrators of the attacks and sentenced them to eight, 46 and 53 years in jail.

But last month, a court reduced by 10 years the sentences of the two men who had received the longest jail terms. The third convict was granted parole in September 2021.

A handful of protestors who demand an investigation into the relationship between Spain’s intelligence agency (CNI) and the imam instigator of the attack, who had reportedly been a CNI informer, jeered and chanted during the moment of silence and held up signs that read: ‘We demand the truth.’

Click here for all our previous reports on the Barcelona Terror Attacks.

Five years after the #17August terrorist attacks in Barcelona and Cambrils, the @govern of Catalonia pays tribute to the victims and their families. We hold them all in our thoughts today #17A https://t.co/lwyGD8VnLD pic.twitter.com/BslFYFIFs6