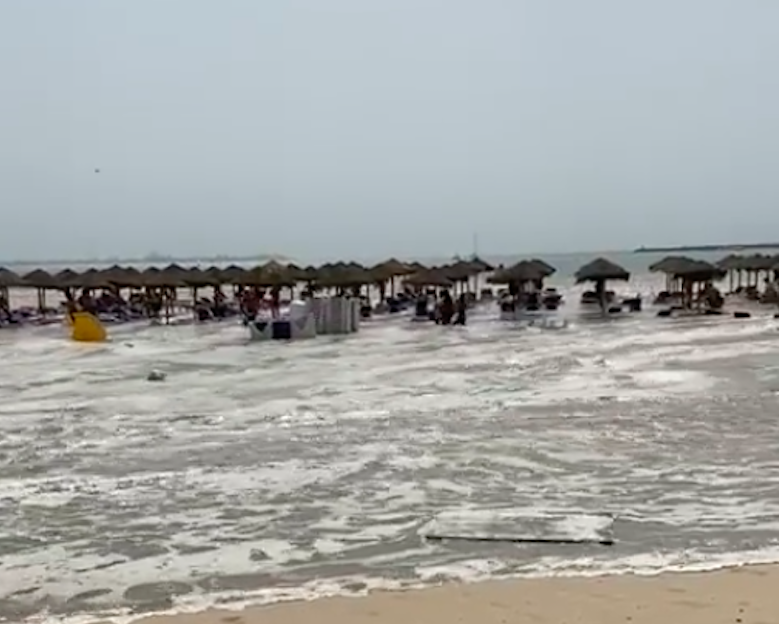 Bathers and beachgoers on Valdelagrana beach located in Puerto de Santa María, in the Cádiz province of Andalusia, were taken by surprise by a ‘mini-tsunami’ on Saturday, that engulfed a large section of the beach within seconds, drenching everything in its path (see videos in tweets below).

The sudden rise in the water level at the beach caused temporary havoc as the seawater dragged sunbeds, rubbish containers, and wooden walkways into the sea, including towels, umbrellas and many beach bags. A sunbed hire business was also flooded, as was the beach’s lifeguard post.

Many beachgoers at a bar made a quick dash into the sea to retrieve their belongings as the water took them away.

The phenomenon is known as a ‘sneaker wave’, when high tides during full moons can sometimes result in a large coastal wave.

Despite the wave’s wide expanse the water was only ankle high, and nobody was injured.

‘We reiterate, for the peace of mind of all our residents and visitors who are enjoying the summer holidays in our city, what happened [on Saturday] on Valdelagrana beach is only a high tide, with the full moon making it reach its highest level,’ Puerto de Santa María authorities wrote in response to the bizarre event.