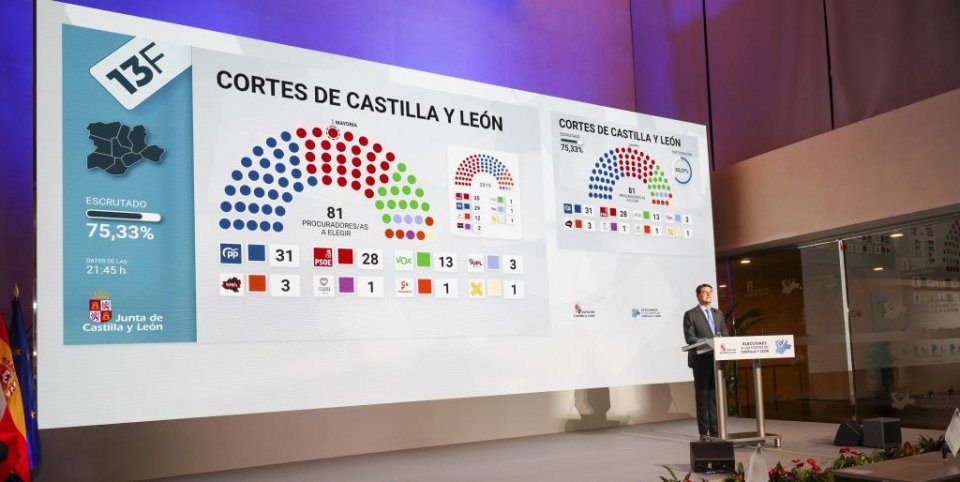 The right-wing People’s Party (PP) won the regional election in Castilla y León on Sunday, but failed to win enough support to govern on its own. The party won 31 seats in the 81 seat parliament, up from 29 in 2019.

The big winner was the far-right Vox party, with 17.6% of the votes. The party that is Spain’s third largest at national level and led by Santiago Abascal went from having a single seat to winning 13 seats in the regional parliament, thus holding the key to forming a government. The PSOE socialists won 28 seats (down from 35), with Ciudadanos (Cs) dropping from 12 seats in 2019 to just one.

The PP led by the Alfonso Fernandez Mañueco in Castilla y León will need a partner to be able to push through the laws over the next four years. Vox leader Abascal stated on Sunday night that ‘Vox has the right and duty to form a government’ – but Mañueco has said that he will be speaking to ‘all groups’, including the PSOE.

Despite winning the majority with 31 seats, the PP lost nearly 60,000 votes. Its previous coalition partner had been the Cs party.

The PSOE, led by candidate Luis Tudanca, was the most voted party with 35 seats in the 2019 elections, but fell to 28 seats and lost more than 120,000 votes on Sunday.

The PP had called for the early election, presenting them in national terms as an opportunity for citizens to show their rejection of the policies of the left-wing central coalition government headed by Prime Minister Pedro Sánchez. The coalition between PP and Cs had become strained in Castilla y León, particularly over Covid-19 measures, and the PP had hoped to emulate the election success of Isabel Díaz Ayuso in Madrid.

Castilla y León has traditionally been a right-wing stronghold. Despite the PSOE winning the popular vote there in May 2019, the PP had quickly formed a coalition with Cs and got Mañueco installed as regional president.

The PP will now have to find a new partner to govern in the region following Sunday’s results, and all indications are that it will have to involve the far-right Vox group.