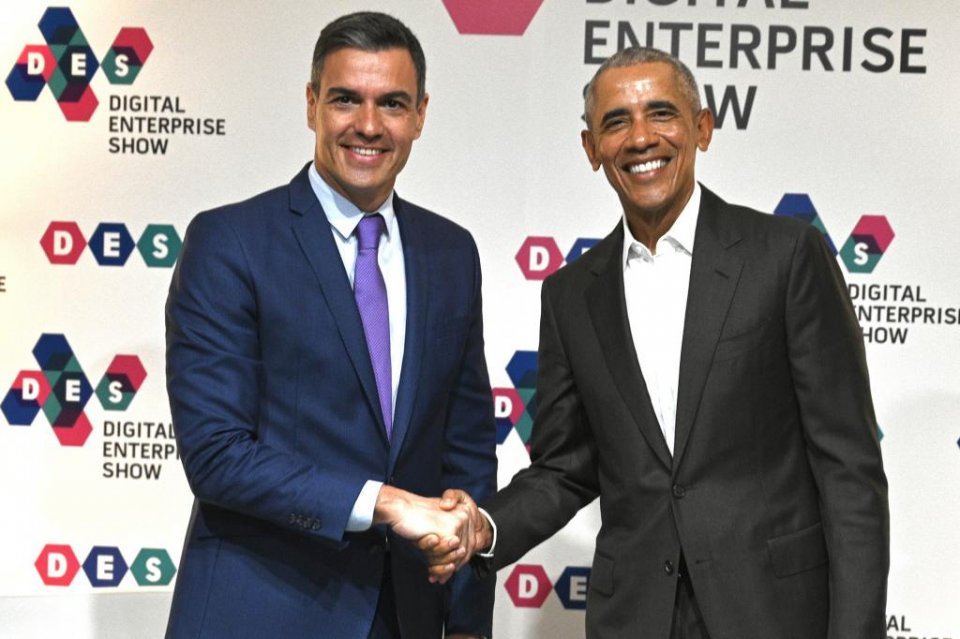 Spanish Prime Minister Pedro Sánchez inaugurated the sixth edition of the Digital Enterprise Show (DES) in Málaga (Andalusia) on Tuesday, a congress that aims to promote the city as an international centre of technological innovation in southern Europe, and to accelerate the digitalisation of companies and public administrations.

At the congress Sánchez also held a meeting with the former US President Barack Obama – the third time they have met, after 2018-19.

The former US president was taking part in ‘A Conversation with Barack Obama’, a question and answer session which has become the highlight of the three-day congress on innovation and technology. He had arrived in the south of Spain on Sunday and had been pictured playing golf on Monday.

Pedro Sánchez and the president of the Junta de Andalucía, Juanma Moreno, were among the guests at an inaugural session after Obama’s talk.

According to Moncloa, in a sideline meeting Sánchez and Obama discussed the global challenges facing the international community, particularly resulting from the war in Ukraine and its economic and social consequences, as well as the concern for the world food crisis.

They also discussed the importance of digital transformation and the ecological transition to combat the climate emergency.

The DES brings together 500 experts in digital transformation and the objective is to share knowledge, strategies and success stories.

The Obama administration gave special importance to policies related to technology, with Obama himself described as ‘the first technological president of the USA’, developing ambitious public investment projects in digital infrastructure to boost economic development and improve public services through information technology.

‘Now it is our duty to move forward on this path,’ Sánchez said in his own speech at the congress. ‘The future of the European project will largely depend on our ability to carry out the digital and ecological transitions successfully and fairly, a task that Spain is determined to lead with the highest degree of commitment and with specific measures and financing that we are already implementing.’

Sánchez also highlighted the fact that Málaga will be the venue for the DES for the next five years – in previous editions it has been held in Madrid – laying the foundations for what he hopes will also be the choice of the Andalusian city as the venue for the next International Exhibition 2027, ‘in a commitment that adds two basic axes of transformation: digitalisation and sustainability’.

The congress has filled Málaga’s hotels, which have reported an occupation rate of 96% between 14-16 June, with some delegates having to stay in neighbouring Torremolinos and Benalmádena.

The economic impact of the event on the area is expected to be over 30 million euros, according to reports.

Not all of the the 14,000 delegates were able to attend the session with Obama in person. It was reported that only those with an ‘Honour Pass’ had the opportunity – on sale for 1,990 euros.