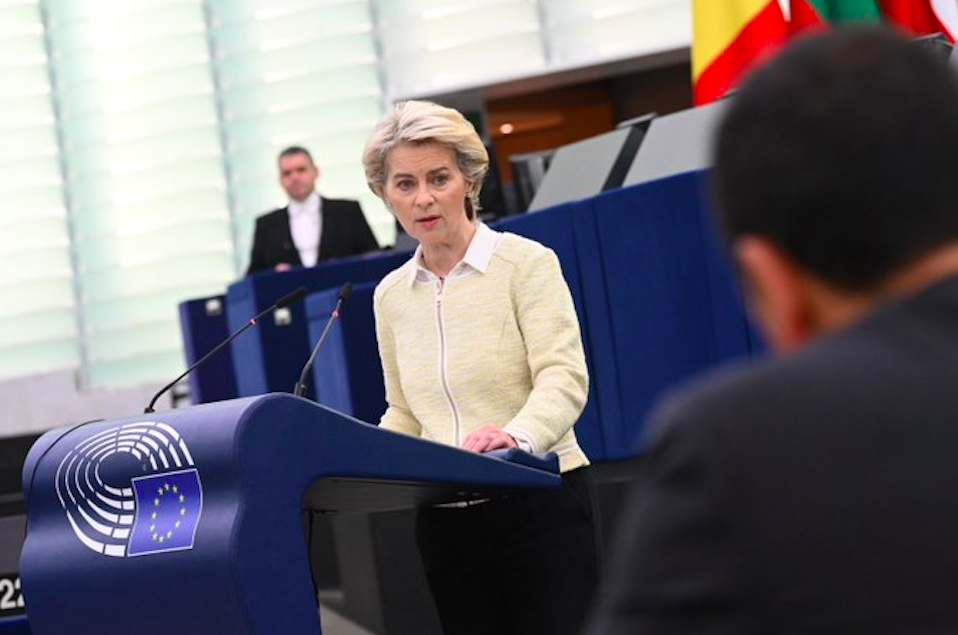 The European Commission’s president has called on the 27-nation bloc to ban oil imports from Russia and target the country’s biggest bank and major broadcasters in a sixth package of sanctions against Moscow for its war in Ukraine. She said it would ‘be a complete import ban on all Russian oil, seaborne and pipeline, crude and refined’.

Ursula von der Leyen, addressing the European Parliament in Strasbourg on Wednesday, proposed that the EU’s member nations should phase out imports of crude oil within six months and refined products by the end of the year.

‘We will make sure that we phase out Russian oil in an orderly fashion, in a way that allows us and our partners to secure alternative supply routes and minimises the impact on global markets,’ von der Leyen said.

The proposals need to be unanimously approved to take effect and are likely to be the subject of fierce debate. Von der Leyen acknowledged that getting all 27 member countries – some of them landlocked and highly dependent on Russia for energy supplies – to agree on oil sanctions ‘will not be easy’. Hungary and Slovakia have already said they won’t take part in any oil sanctions

The EU gets about 25% of its oil from Russia, most of which goes toward gasoline and diesel for vehicles. Russia supplies about 14% of diesel, and a cut-off could send already high prices for truck and tractor fuel towering.

If approved, the ban on oil imports will be the second package of EU sanctions targeting Russia’s lucrative energy industry over its war in Ukraine that President Vladimir Putin started on 24 February. In addition to sanctions on various entities and individuals – including Putin himself and members of his family – the bloc previously approved an embargo on coal imports.

The EU has started discussions on a possible natural gas embargo, but consensus among member countries on targeting the fuel used to generate electricity and heat homes is more difficult to secure. The region gets about 40% of its natural gas from Russia.

In a sign of the political pressure that von der Leyen has been under to widen EU sanctions on Russia energy, some European Parliament members on Wednesday stepped up calls for the bloc to target imports of natural gas from Russia as well.

Von der Leyen also said that the EU should target high-ranking military officers and others ‘who committed war crimes in Bucha‘, a suburb of the capital Kyiv. Ukrainian officials have alleged that retreating Russian troops carried out mass killings of civilians in Bucha. Also read: Pedro Sánchez sees possible ‘genocide’ by Russian forces in Ukraine.

‘This sends another important signal to all perpetrators of the Kremlin’s war: We know who you are. We will hold you accountable. You’re not getting away with this,’ von der Leyen told MEPs.

Von der Leyen said that Putin’s intention is ‘to wipe out Ukraine from the map’, but predicted he will fail in his deadly enterprise. ‘On the contrary, Ukraine has risen in bravery and in unity,’ she said. ‘And it is his own country, Russia, that Putin is sinking.’

Von der Leyen said that Sberbank holds around 37% of the Russian banking sector. ‘And we will also de-SWIFT two other major banks in Russia. By that, we hit banks that are systemically critical to the Russian financial system and Putin’s ability to wage destruction,’ she said.

Von der Leyen also said that those alleged to be spreading disinformation about the war in Ukraine would be targeted.

‘We are banning three big Russian state-owned broadcasters from our airwaves. They will not be allowed to distribute their content anymore in the EU, in whatever shape or form be it on cable, via satellite, on the internet or via smartphone apps,’ she said.

She didn’t name the broadcasters directly, but branded the television channels ‘as mouthpieces that amplify Putin’s lies and propaganda aggressively. We should not give them a stage anymore to spread these lies’.

‘Moreover, the Kremlin relies on accountants, consultants and spin doctors from Europe,’ she said. ‘And this will now stop. We are banning those services from being provided to Russian companies.’

Soon we will celebrate Europe Day.
A day to reflect on our Union.
But also on the future of the EU.
Which today, is also written in Ukraine. https://t.co/pxhdYDTvfj