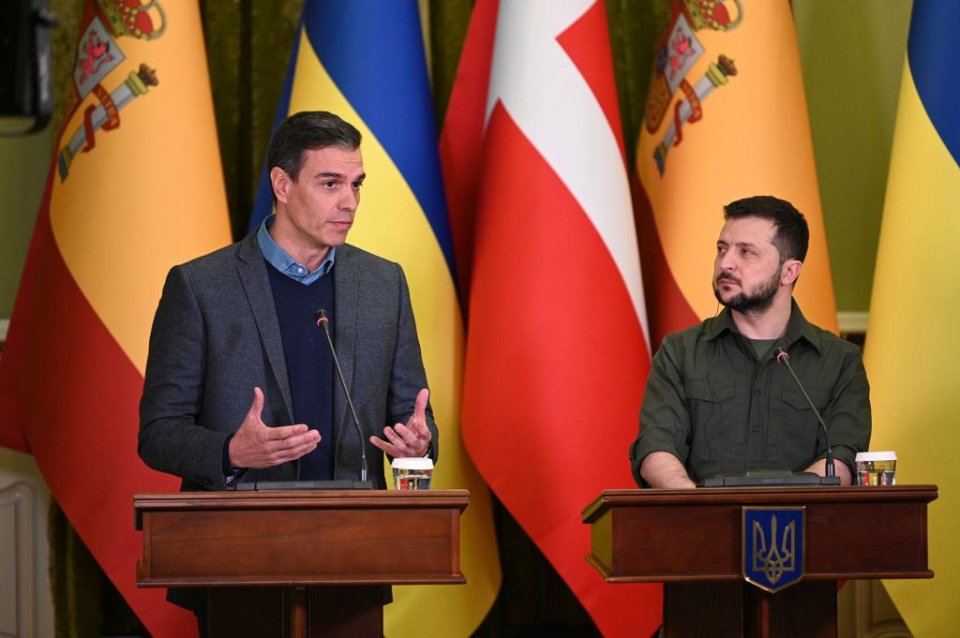 Spanish Prime Minister Pedro Sánchez met with the Ukrainian President Volodymyr Zelensky in Kyiv on Thursday and announced that Spain would be sending more arms to Ukraine – its largest shipment to date.

Sánchez said that a new shipment of 200 tonnes of military equipment is on its way to Poland, and it would be ‘the largest made so far’ by Spain, since it doubles what has been received so far by Kyiv.

The new contingent also includes 30 trucks and 10 smaller vehicles, said the Spanish prime minister, who also promised to increase humanitarian aid, especially for minors, part of which will be managed by Unicef.

Sánchez travelled to Kyiv with and his Danish counterpart Mette Frederiksen. Both leaders arrived in the Ukrainian capital by train, after traveling overnight from Poland.

Before meeting with Zelensky, Sánchez and Frederiksen headed to the town of Borodyanka, about 48 kilometres north-west of Kyiv, which was besieged and shelled by Russian troops.

Sánchez tweeted that he was ‘moved to see the horror and atrocities of Putin’s war on the streets of Borodyanka. We will not leave the Ukrainian people alone.’

The bodies of nine civilians, some showing signs of torture, were found on Wednesday night in two graves around Borodyanka, a senior police official said.

Sánchez announced the new arms shipment at a joint press conference offered by the three leaders after the meeting.

Sánchez had said on Wednesday that Spain would continue to work for an end to Russia’s war in Ukraine, while also sending ‘all the humanitarian and military aid needed’ and taking in Ukrainian refugees.

Spain has now taken in 134,000 Ukrainians, of whom 64,000 have received temporary protection, including accommodation and a work permit.

In another sign of support for Kyiv, Sánchez had also announced on Monday that Spain would re-open its embassy in the Ukrainian capital ‘in a few days time’. The embassy suspended activity the day after the Russian invasion on 24 February for security reasons.