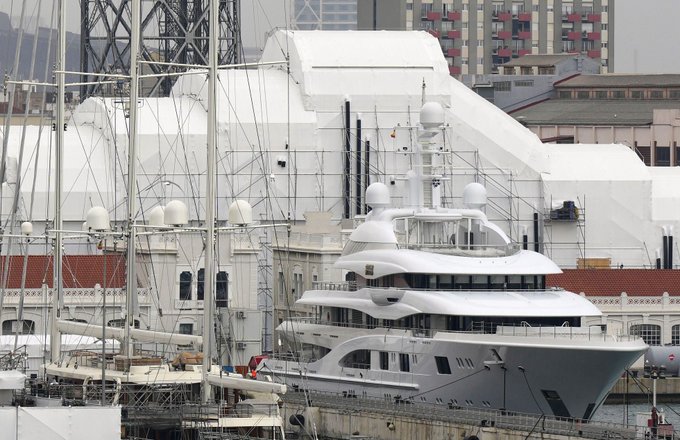 Spanish authorities impounded a third yacht suspected of belonging to a Russian oligarch on Wednesday, as part of the EU sanctions over the Ukraine war, the transport ministry said.

The 135-metre long yacht, Crescent, has been stopped from leaving the Catalan port of Tarragona whilst police determine if it ‘belongs or is under the control of’ someone on the EU sanctions list, the ministry said in a statement.

The yacht reportedly belongs to Igor Sechin, the head of Russia’s oil giant Rosneft and another ally of Russian President Vladimir Putin. The Crescent has been docked in Tarragona since November. It had requested permission to depart the port on 4 March but did not set sail, the ministry said.

Sechin is on the EU’s list of Russian tycoons targeted by sanctions following Russia’s invasion of Ukraine on 24 February.

On Tuesday this week, Spanish authorities impounded a yacht called Lady Anastasia on the island of Mallorca which reportedly belongs to Russian tycoon Alexander Mikheev, the head of weapons exporting group Rosoboronexport. The same yacht had been in the news at the end of February when a Ukrainian sailor was arrested in Mallorca by Spain’s Guardia Civil for trying to sink the vessel. Also read: Ukrainian sailor in court for trying to sink luxury yacht of Russian boss in Mallorca.

Spanish Prime Minister Pedro Sanchez announced Monday during a TV interview that police had impounded another 85-metre-long yacht in Barcelona [see report below].

An 85-metre yacht worth $140 million has been impounded in the port of Barcelona, Spanish Prime Minister Pedro Sánchez has said. It reportedly belongs to Russian oligarch Sergei Chemezov.

The yacht is reportedly named Valerie, which is linked to Rostec defence firm chief Chemezov, a former KGB officer and an ally of Russian President Vladimir Putin.

‘Today we seized – the technical term is provisionally immobilised – a yacht belonging to one of the principal oligarchs,’ Sánchez said on La Sexta television. ‘We are talking about a yacht that we estimate is worth $140 million,’ he said, adding that ‘others were to follow’, without giving further details.

The Valerie superyacht sails under the flag of Saint Vincent and the Grenadines. The vessel is registered to Chemezov’s stepdaughter, Anastasia Ignatova, through a British Virgin Islands company, according to a 2021 article published in the Pandora Papers information leak.

Yachts are among the assets of oligarchs targeted by sanctions imposed by the United States and European Union following Russia’s invasion of Ukraine.

Chemezov had previously been sanctioned by the United States in 2014 and by the UK in 2020 over his involvement in Russia’s annexation of Crimea. He was also named in sanctions lists this month by the United States and Australia. The US sanctions also targeted Chemezov’s stepdaughter, as well as his wife and son. A fourth package of EU sanctions against Russia is due to be unveiled in the coming days.

The yacht has been in Barcelona since 9 February, according to Marine Traffic, and was until Monday under repair at Barcelona’s shipyard MB92.

My Solaris, the €500 million superyacht of Russian billionaire Roman Abramovich, left Barcelona on 11 March and its crew are now looking to dock at a port further East where the vessel will not be seized by authorities.

Man jumps from 7th floor of block of flats in Sitges, but only breaks one leg