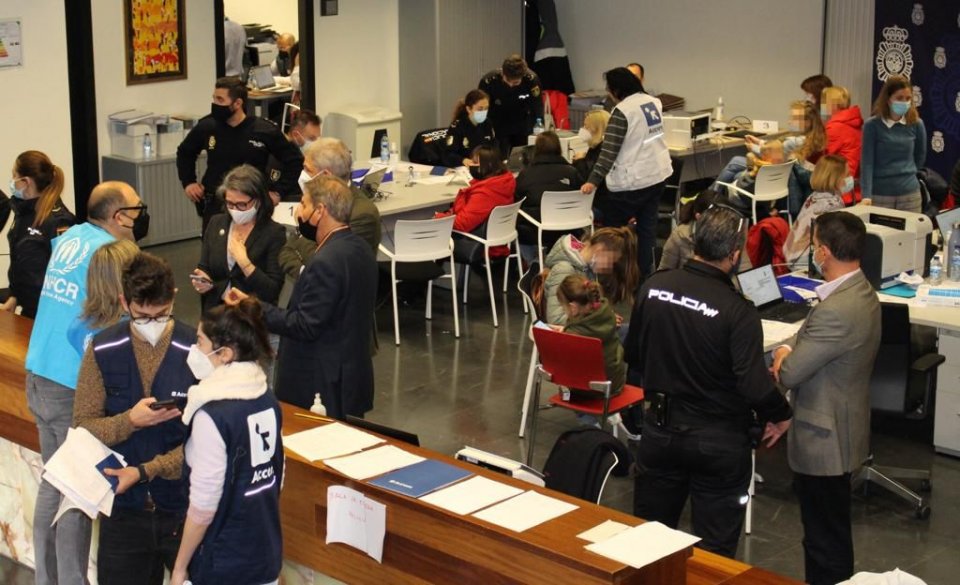 Spain is setting up four main reception and referral centres in Madrid, Barcelona, Alicante and Málaga as part of its overall Reception Plan for displaced persons from Ukraine, following the invasion of Russia and on-going war.

Spanish Minister for Inclusion, Security and Migration, José Luis Escrivá, highlighted the government’s commitment to help those fleeing the war in Ukraine this week when he presented the plan, which has resulted, he said, in a ‘rapid deployment of four reception and referral centres to facilitate the care of displaced persons and offer emergency shelter to those who need it’. He said it was a ‘flexible’ plan based on a series of key centres and a wider network of resources throughout the whole country.

Escrivá said that ‘we have strengthened our reception network, in coordination with other public administrations and third sector entities, and with a new family reception programme’. The minister said that the plan followed the European directive on temporary protection that allows displaced persons from Ukraine ‘to reside, work and access the catalogue of benefits of the 27 EU countries’. Also read: EU nations lift visa rules for Ukrainians fleeing Russian invasion.

Escrivá also reiterated that Spain had set up an ‘unprecedented simplification of procedures that allows displaced persons to obtain work and residence permits in 24 hours’, allowing the procedures to be carried out both in the reception centres and in police stations. Also read: Spain launches ‘streamlined, simple’ system for receiving Ukrainian refugees.

The Pozuelo de Alarcón centre in Madrid was the first to open its doors on 11 March with the support of Accem. The Alicante centre has since opened its doors, located in the Ciudad de la Luz with the support of the Red Cross; and this week the Barcelona centre is scheduled to open, in the Fira Exhibition Centre, where it will also be supported by the Red Cross. There will be a fourth centre, in Malaga, where a suitable location is being sought and it will be supported by CEAR.

The reception centres perform three functions, Escrivá said: ‘Firstly, they receive displaced persons from Ukraine and give them an initial orientation; secondly, they enable the completion of work and residence permit procedures within 24 hours; and finally, they decide on the referral of those in need to the most suitable places available, following in-depth interviews.’ For this reason, the creation of these Reception, Care and Referral Centres (CREADE), he said, makes it possible to ‘centralise all these functions in a single place, facilitating the care of displaced persons’.

In Spain, displaced persons not only have the right to work and residence permits, but, according to the minister, ‘they also have access to a wide range of benefits, ranging from accommodation and food, legal and psychosocial assistance, employment assistance, health care, schooling and financial aid’. In addition, the Ministry of Home Affairs issued an instruction on Tuesday under which displaced persons from Ukraine will be able to legally use their driving licences in Spain for at least one year.

Activity in the Pozuelo centre, Madrid

Within the first four days of its opening since 11 March, more than 800 applications for temporary protection from Ukrainians were received in the Pozuelo centre in Madrid, with work and residence permits granted to all of them. ‘Among those assisted, more than half were minors and, among adults, there are twice as many women as men,’ Escrivá said. By area of origin, the majority of those assisted came from Kiev, 12% from Odessa, 10% from Lviv and 12% were already resident in Spain.

The centre also received 2,700 calls in the first four days of its operation, with ‘almost 40% of the calls to request an appointment to carry out procedures at the centres and a third were to request information, both on temporary protection and on other formalities’.

The minister stressed that ‘at the same time as opening the reception centres in Madrid, Alicante, Barcelona and Malaga, we are adding a new family reception programme to the reception centres’. The network has increased by more than 21,000 places thanks to the expansion of the reception system and spaces for 15,000 people made available by the regional governments.

The minister also said that we are developing ‘a new reception programme that will allow us to manage a pool of families and will be deployed through a network of social mediators who will verify the suitability of the housing offered’. This programme will be developed in collaboration with the municipal social services.

The Ministry, aware of the demand for information from both new arrivals and Ukrainian associations and communities in Spain, has set up a dedicated portal that provides information on services, telephone numbers and addresses, and places to carry out formalities. This information is also available in Ukrainian with more than 33,500 visits in one week. Click here to access it in Spanish, and here in Ukrainian.

Terraces in Sitges prepare to return to normal dimensions

Coronavirus in Spain weekly figures (18 March) – under 600 in ICUs