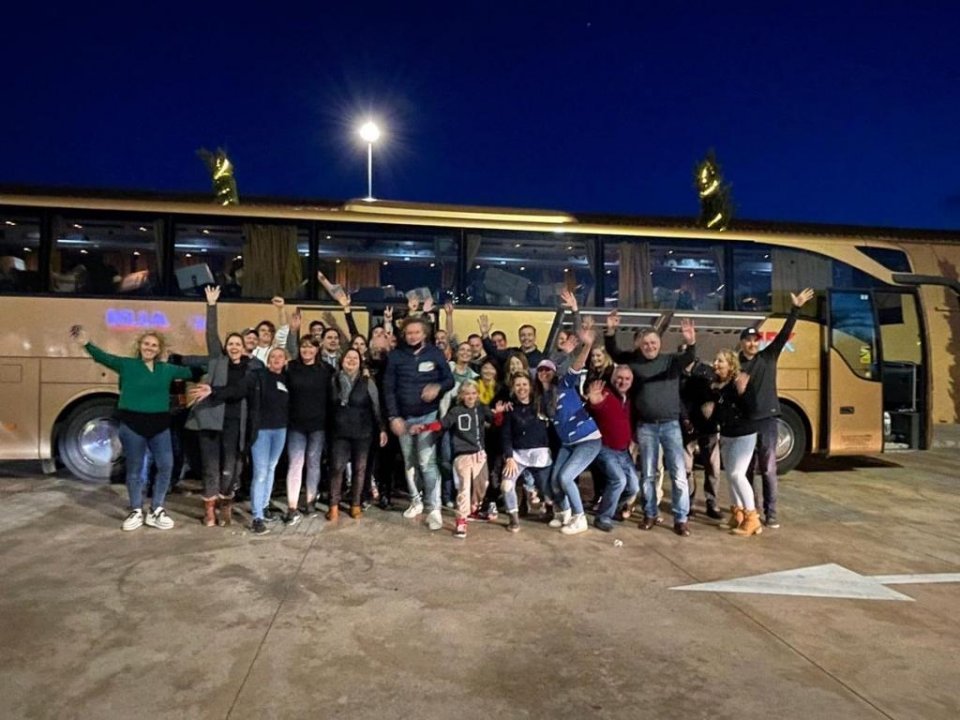 It all started on 6 March. After several days of seeing the news following the Russian invasion of Ukraine, five friends in Catalonia became determined to travel in their own cars to the Polish-Ukrainian border to bring back displaced people from the on-going war, as a couple from Galicia had already done.

Initially they were going to travel with four cars, with the aim of bringing back 12 people and placing them, for an indefinite time, in the homes of trusted family and friends.

By discussing it with others and spreading the news through their children’s local schools, however, there was a constant trickle of volunteer drivers willing to sign up – finally 24 of them, mainly from Sitges, Sant Pere de Ribes, Vilanova i la Geltrú and surrounding areas in Catalonia.

The project grew exponentially, hour by hour, with more and more volunteers offering to help. They also decided that they needed a bus to make the trip safer and more efficient, but the news of a possible strike in the transport sector didn’t help. Finally a Polish bus company provided the volunteers with two of their own coaches.

In parallel, more than 200 volunteers had become responsible for the collection, classification, packaging and labelling of all the humanitarian aid material to take on the journey, collected mainly through their children’s schools, as well as with local council support, until they had completely filled all the vehicles scheduled for the expedition.

A delegation of 18 people, distributed between two buses, eight vans and one campervan finally left Sitges for Medyka in Poland, on Sunday and Monday, with the capacity to bring back a total of 140 refugees. Under the overall banner of ‘Spain4Ukraine’, the ‘Fidels FCB 1899’ group is also taking part in the convoy, made up of Barça fans who usually travel internationally to follow their team.

In Medyka, they are working with Spanish firemen who are at the border checking papers and preparing a list of refugee passengers. Also read: Spain launches ‘streamlined, simple’ system for receiving Ukrainian refugees.

The vehicles are packed with around 400 boxes of humanitarian aid to unload on arrival at the Ukrainian border, including 90 boxes of food alone. They are also taking products to make the return trip as pleasant as possible, especially for the child refugees, including car seats, pacifiers, blankets, movies, paintings, toys and water bottles.

Whilst the delegation is on its way to the Polish-Ukrainian border, in Spain the team is continuing to work non-stop in anticipation of the refugees’ arrival, in the following ways:

By Monday 14 March morning, the convoy was still more than 1,000km from Medyca – yet their contacts at the border had already sent details of the first list of refugees, with the names of the women and children who, at the moment, are expected to board their vehicles on the return journey to Spain.

Spain 4 Ukraine has created an Instagram account, where they are posting photos from the journey – and there is also a Facebook group page for those who can offer further help. They have also opened a bank account to raise money for the war-torn Ukrainian population. To date [Monday 14 March], they have raised more than €19,000 and plan to reach €40,000. You can donate by clicking here.