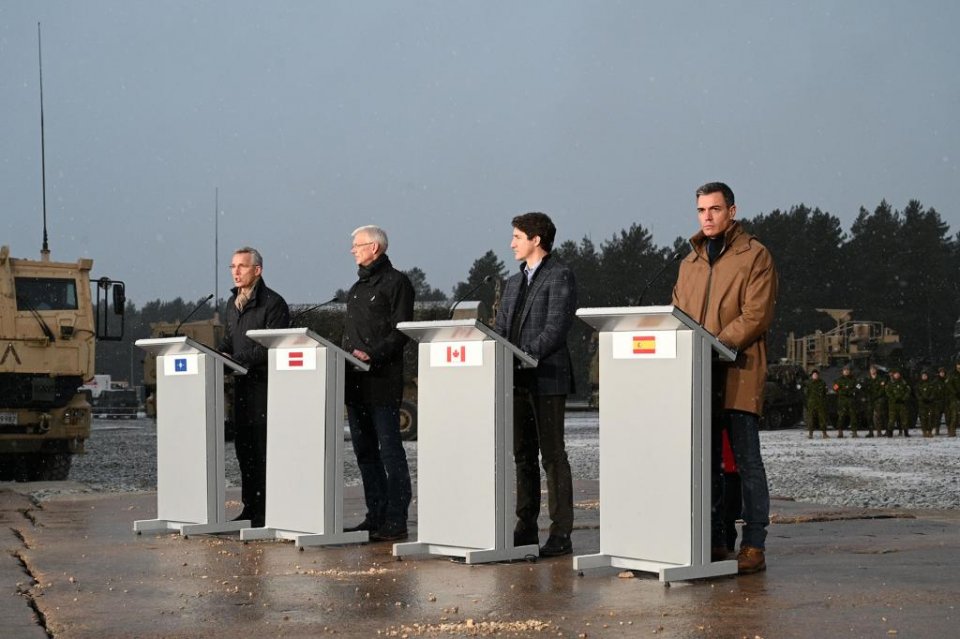 Spain’s Prime Minister Pedro Sánchez travelled to a NATO military base in Adazi in Latvia on Tuesday to visit Spanish troops, whose mission is to help protect the border with Russia, 120 kilometres away.

Sánchez was accompanied by the Secretary General of NATO, Jens Stoltenberg, the Prime Minister of Latvia, Arturs Krisjanis Karin, and the Prime Minister of Canada, Justin Trudeau, the country that leads the tactical group, with Spain as the second largest contributor. The trip was to show ‘an expression of transatlantic commitment and unity in the face of the Russian invasion of Ukraine’, as well as the support of all allies for the Baltic States.

‘Our unity is our strength,’ said Sánchez, who also thanked Canada for the ‘excellent collaboration and teamwork’ shown in leading the Adazi mission, comprised of troops from 10 different countries.

‘Our main commitment is to peace. NATO is a defensive alliance and all our actions so far should be understood as deterrence efforts to avoid confrontation,’ stressed Sánchez. He reiterated that Spain is ‘fully committed’ to supporting NATO’s work and ‘ready’ to respond to the allies’ appeals.

Spanish troops are the second largest contingent in Adazi, with 350 military personnel, to which an additional 157 are now being added. It has six battle tanks and armoured vehicles.

During the meeting with Spanish troops, Sánchez stressed his gratitude for ‘the dedication, solidarity and generosity of our soldiers’. He said: ‘With your dedication and professionalism, you are contributing to a safer world for all.’

Sánchez also reiterated Spain’s firm commitment of solidarity with the Ukrainian people in the current circumstances of the humanitarian crisis that the war is causing, with more than 2 million refugees to date. Also read: Over two million have now fled the war in Ukraine, according to UN.

‘Today [8 March, International Women’s Day] should be the day of women and girls in Ukraine. Unfortunately, Putin’s brutal aggression is causing them to flee or fight for their lives. I want to pay tribute to all of them and reaffirm that we will stand by them,’ said Sánchez.

Sánchez reaffirmed Spain’s unconditional support for Ukraine and the defence of its sovereignty and territorial integrity. ‘The time for solidarity has come and I can assure you that Spain will rise to the occasion and provide international protection to the maximum number of refugees possible,’ he said, adding that Spain had condemned Russia’s aggression against Ukraine in the strongest terms, ‘which we are supporting to the best of our ability’.

NATO chief Jens Stoltenberg thanked Spain for its contribution to the Atlantic Alliance forces, stressing that the country ‘is leading by example, deploying additional troops, ships and aircraft to strengthen our defensive position in Europe’.

Spain will be hosting the NATO Summit in Madrid in June.

Covid figures have skyrocketed in Sitges following the Carnival