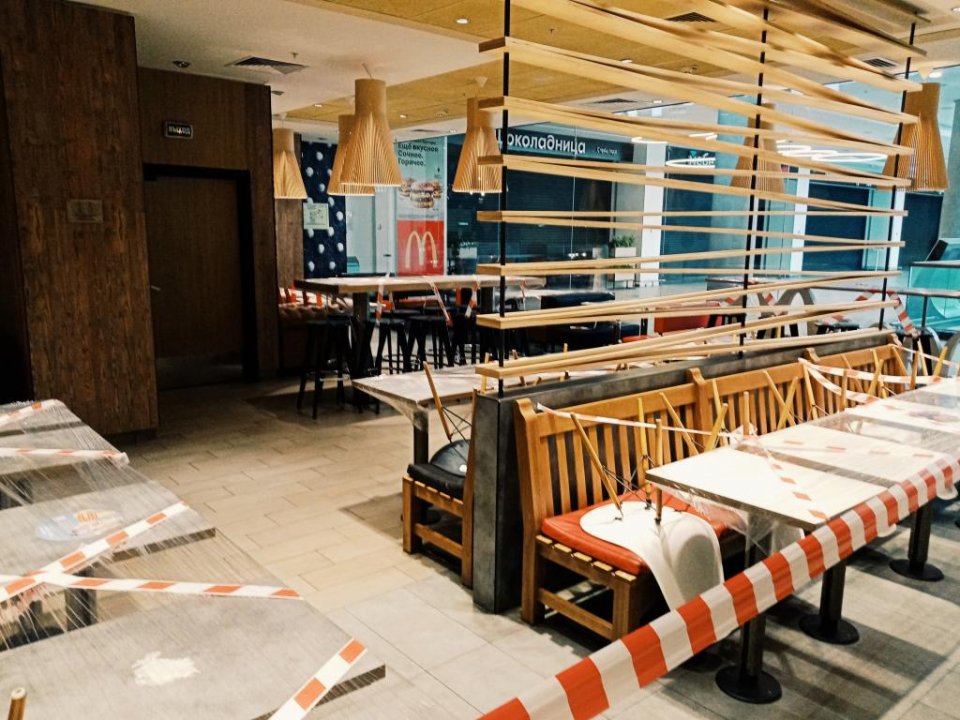 McDonald’s, Coca-Cola, PepsiCo, Starbucks and General Electric all announced on Tuesday that they were all now temporarily suspending their business operations in Russia in response to the country’s invasion of Ukraine.

‘Our values mean we cannot ignore the needless human suffering unfolding in Ukraine,’ McDonald’s president and CEO Chris Kempczinski said in an open letter to employees.

The Chicago-based burger giant said it will temporarily close 850 stores but continue paying its 62,000 employees in Russia ‘who have poured their heart and soul into our McDonald’s brand’.

Kempczinski said it’s impossible to know when the company will be able to re-open its stores. ‘The situation is extraordinarily challenging for a global brand like ours, and there are many considerations,’ he wrote in the letter. McDonald’s works with hundreds of Russian suppliers, for example, and serves millions of customers each day.

Unlike Starbucks and other fast food companies like KFC and Pizza Hut [see below], whose Russian locations are owned by franchisees, McDonald’s owns 84% of its Russian stores. McDonald’s has also temporarily closed 108 restaurants it owns in Ukraine and continues to pay those employees.

In a recent regulatory filing, McDonald’s said its restaurants in Russia and Ukraine contribute 9% of its annual revenue, or around $2 billion last year.

McDonald’s also said on Tuesday that it has donated more than $5 million to its employee assistance fund and to relief efforts. It has also parked a Ronald McDonald House Charities mobile medical care unit at the Polish border with Ukraine – and another mobile care unit is en route to the border in Latvia, the company said.

McDonald’s was one of the first US fast food companies to open a store in Russia, in a sign that the Cold War had thawed. On 31 January 1990, thousands of Russians lined up before dawn to try hamburgers, many for the first time, at the first McDonald’s in Moscow. By the end of the day, 30,000 meals had been sold.

Last Friday, Starbucks had originally said that it was donating profits from its 130 Russian stores – owned and operated by Kuwait-based franchisee Alshaya Group – to humanitarian relief efforts in Ukraine. But on Tuesday, the company changed course and said it would temporarily close the stores. Alshaya Group will continue to pay Starbucks’ 2,000 Russian employees, Starbucks president and CEO Kevin Johnson said in his own open letter to employees.

‘Through this dynamic situation, we will continue to make decisions that are true to our mission and values and communicate with transparency,’ Johnson wrote.

PepsiCo and General Electric also both announced partial shutdowns of their Russian activity.

Pepsi, based in Purchase, New York, said it would suspend sales of beverages in Russia. It will also suspend any capital investments and promotional activities. But the company said it would continue to produce milk, baby formula and baby food, in part to continue supporting its 20,000 Russian employees and the 40,000 Russian agricultural workers who are part of its supply chain.

‘Now more than ever we must stay true to the humanitarian aspect of our business,’ PepsiCo CEO Ramon Laguarta said in an email to employees.

PepsiCo entered the Russian market in the early 1960s, at the height of the Cold War, and helped to create common ground between the US and the Soviet Union.

General Electric also said in a Twitter post that it was partially suspending its operations in Russia. GE said two exceptions would be essential medical equipment and support for existing power services in Russia.

Today GE shared an update regarding its operations in Russia. pic.twitter.com/1hj7LXMYYz

Meanwhile, Burger King said it is redirecting the profits from its 800 Russian stores to relief efforts and donating $2 million in food vouchers to Ukrainian refugees.

In a message shared to employees and franchisees, CEO Chris Kempczinski shared that McDonald's will temporarily close all restaurants and pause all operations in Russia. Click to read the message in its entirety. https://t.co/g8BXaKxvNj pic.twitter.com/6jt0NnYhKz