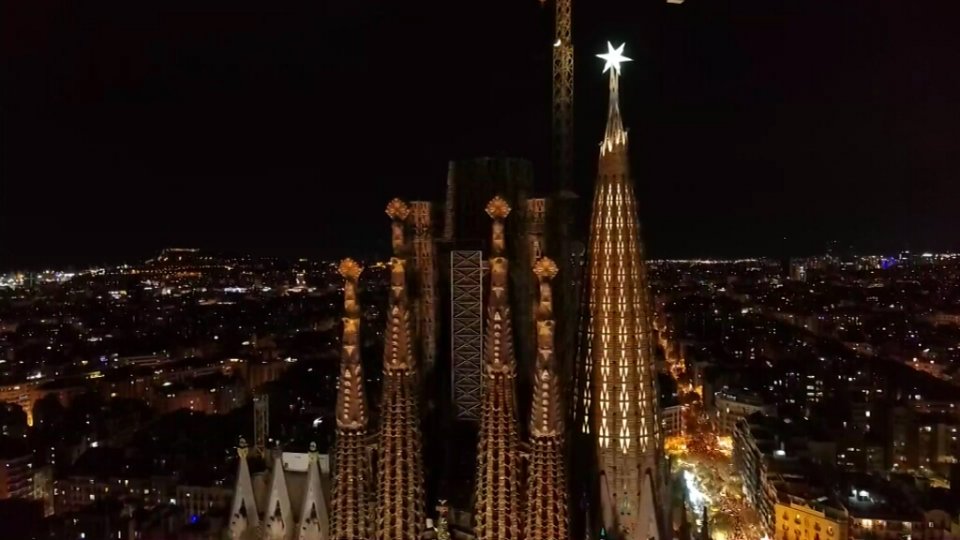 The Barcelona skyline has a new star – after the 12-point star on top of the tower of the Virgin Mary of the iconic Sagrada Família was lit up for the very first time on Wednesday evening.

Antoni Gaudí’s acclaimed temple – full name the Expiatory Temple of the Sagrada Familia – has thereby reached a new milestone in its 139-year history, with the lighting of the star that was completed and fixed on to the top of the ninth spire on 29 November.

The 5.5-tonne star, over seven metres wide, lights up what will be the second-tallest tower of the whole basilica when it is finished, although the tallest, which will be dedicated to Jesus Christ, is not yet built.

Thousands of people gathered in the vicinity of the iconic cathedral on Wednesday evening, packing out the streets and adjacent parks to get a glimpse of the historic event, and which coincided with the feast of the Immaculate Conception – a national holiday.

Before the star was illuminated, a mass was held inside the basilica led by Cardinal Joan Josep Omella i Omella, Archbishop of Barcelona, and during which the tower was blessed. The event was streamed online, after tickets for the service itself quickly sold out. The central event of the inauguration festivities included the premiere of MAGNIFICAT, a musical piece composed by Marc Timón and performed by Orfeó Català.

This is one of the most significant milestones to be met in the development of one of the most complicated and iconic structures in the world in recent years. The star sits above all current spires and will be the second highest in the finished plan.

The Sagrada Familia has notoriously been delayed many times in its almost 140-year history. The most recent delay is due to the Covid-19 pandemic and has set back works on completing the cathedral at least two years back from its 2026 deadline, 100 years after the year of the death of Antoni Gaudi, the original architect of the Sagrada Familia.

Since its beginnings in 1882, work on the Basilica had seldom been interrupted – bar the Spanish Civil War and odd periods of financial difficulties. In 2019, it even received an official building permit after 134 years without one. The impact of the Covid-19 pandemic, however, has since become one of the biggest challenges for the project to date.

Forced to close its door to visitors when the first state of alarm was declared in March 2020 and then again in October 2020, serious doubt has been cast on the completion date of the Basilica. Originally set to be finished by 2026 – to coincide with the centenary of Gaudí’s death – the loss of revenue from ticket sales, as well as months of paralysed construction, have forced management to reassess the construction schedule. ALSO READ: Construction resumes on Sagrada Familia – yet fall in tourism revenue delays completion date.

Awareness and solidarity at the Sitges Human Rights Conference

Open Day at Can Milà in Sitges