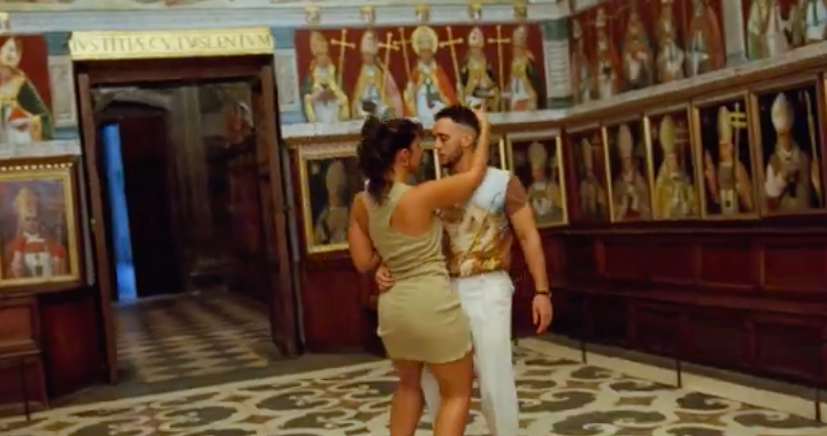 The 13th century Primatial Cathedral of Saint Mary of Toledo is one of the most famous in Spain. But its archbishop, Francisco Cerro Chaves, has been forced to apologise to Catholics across the country after it was used for the setting of a raunchy music video.

The video Ateo (Atheist) was released by Spanish rapper C Tangana and the Argentine singer Nathy Peluso on Thursday [see YouTube link below]. It features the artists dancing sensually and rubbing against each other, as well as a scene in which Peluso is completely naked.

According to a statement released by the diocese, the ‘archbishop deeply regrets these events and disapproves of the images’. The statement also claimed that the archbishop was not aware that such a filming would take place. ‘We humbly and sincerely ask for forgiveness,’ it added.

The release of the video provoked controversy in Spain, where 18.4% of the population declared themselves to be practising Catholics and 39% as non-practicing Catholics.

As the lyrics include, ‘I was an atheist, but now I believe, because a miracle like you must have come down from heaven’, the dean of the cathedral, Juan Miguel Ferrer Grenesche, first tried to give the video a more positive twist. ‘The video presents the story of conversion through human love,’ he said in an earlier statement. ‘It is true that the video uses provocative visual language but that has no impact on the faith.’

While Ferrer Grenesche also apologised, he said it was important to ‘promote dialogue’ between the church and contemporary culture. He said said that the final scenes of the video, in which the singers pose for photographs with an altar boy, showed the church’s ‘welcoming and understanding’ attitude.

Hospital in Murcia describes teenager’s homosexuality as an illness