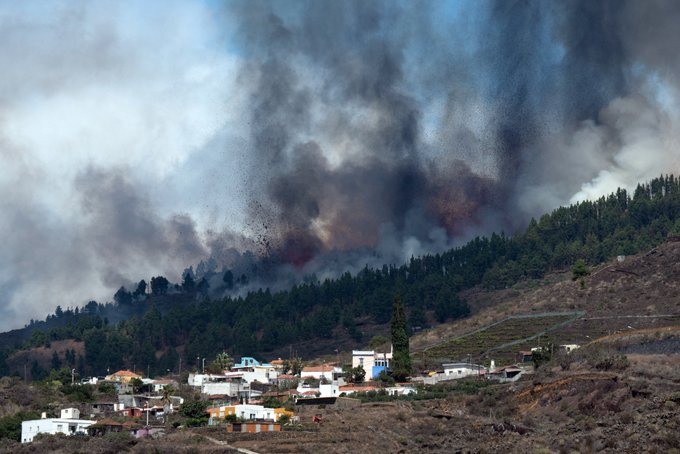 A volcano erupted on Sunday on the island of La Palma in the Canary Islands, following a week of increasing seismic activity.

The Cumbre Vieja volcano, which last erupted 50 years ago, straddles a ridge in the south of La Palma island, home to around 80,000 people.

A giant column of smoke rose up after the eruption at 3.15pm local time in the Cumbre Vieja national park in the south of the island, as the volcano started to spew out lava and ash.

‘The eruption started in the Cabeza de Vaca zone, in El Paso,’ the local government said on its Twitter account. ‘People are asked to be extremely careful and to stay away from the eruption zone to avoid needless risk,’ the government added. The head of the Canary Islands government, Angel Victor Torres, said the zone was forested and ‘sparsely populated’.

Previously the authorities had evacuated about 40 people who have mobility problems, as well as farm animals from nearby villages close to the volcano.

Soldiers were also deployed to help with the evacuation, the Spanish defence ministry said, and more people will be evacuated from surrounding towns.

Spanish Prime Minister Pedro Sánchez postponed a scheduled trip to New York to the UN General Assembly, and headed instead to the Canary Islands. ‘All the services are prepared to act in a coordinated fashion,’ Sánchez wrote on Twitter.

Radio Televisión Canaria reported on Sunday evening that 700 people were being evacuated as a precaution in Los Llanos de Aridane ‘because the lava can affect the main road’. Among the evacuees were 500 tourists staying at a hotel in Puerto Naos.

Experts had been keeping a close watch on the volcano after observing an upsurge in seismic activity and magma displacements. Before the eruption scientists had recorded a series of earthquakes reaching 3.8 magnitude in the national park, according to the Spanish National Geographical Institute (ING).

The earliest recorded volcanic eruption in La Palma took place in 1430, according to the ING. In the last eruption in 1971, one man was killed when he took photographs near the lava flows but no property was damaged.