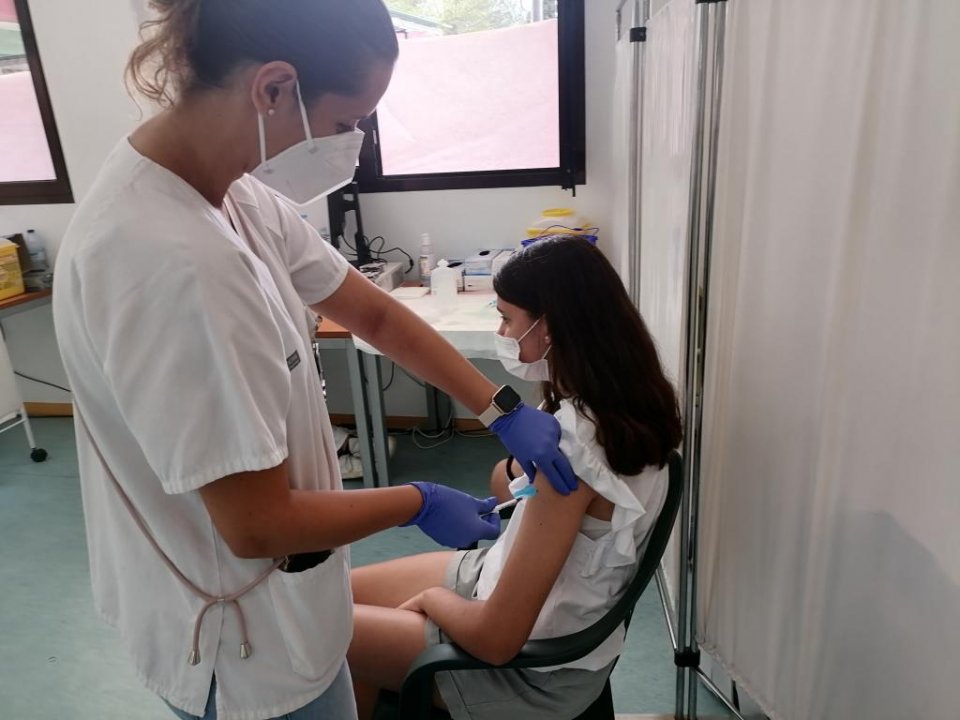 Swimmers at Benidorm’s Poniente beach had a shock on Thursday morning when a blue shark appeared in the shallow waters close to the coast. Police and lifeguards quickly evacuated the water and held beachgoers back as the state of the shark was assessed.

The local police maritime unit tried to entice the shark back out to sea without success, but later experts from Valencia’s Oceanografic arrived and examined the animal. They said the 2.5m female blue shark, which they estimated at weighing 80kg, appeared to have become disorientated, rather than being sick or injured. They managed to move it with specialist equipment and take it out to deeper waters. The beach was re-opened around 3pm.

Blue sharks are the most common variety in the Mediterranean and are generally harmless towards humans, although they do occasionally wash up on the beaches here.

The current restrictions, a maximum of 10 people in social and family gatherings as well as a 1am to 6am nighttime curfew, will be extended until 6 September in 68 towns and cities with populations of more than 5,000 people, where Covid-19 infection levels are of concern. The high rates of infection in these towns is being driven mainly by the spread of the Delta variant. There are 32 in the Valencia province, 27 in Alicante and nine in Castellón.

The measures will be imposed from 17 August until 6 September, following Friday’s approval by the Supreme Court of the health department’s request which had been presented on Wednesday.

As the whole of Spain swelters this weekend under the heatwave which brings with it Saharan dust suspended in the air, temperatures reached highs of more than 43 degrees in some parts of the region yesterday and the high temperatures are expected to continue today (Sunday) according to Aemet, the National Meteorological Agency.

By 2pm on Saturday, Jalance in the Valencia province had recorded 43.4 degrees, while Alcoy was just behind with 43.3 degrees.

Things had already started heating up by Friday with many towns across the region reaching the mid to high thirties. Also read: Heatwave in Spain, as climate change experts warn of intense heat in future.

The dry storms which appeared on Saturday afternoon in some inland areas, combined with the strong winds, caused several forest fires to break out. In a difficult to reach area of pine forest in Bicorp, the blaze was reportedly started by a lightning strike. Four helicopters and six planes were dispatched to deal with the fire along with five fire-fighting teams and two fire engines.

Given the extreme risk of forest fires, Saturday saw the number of natural parks with restricted access expanded to 15. Meanwhile the health department advised against being out in the sun during the hottest hours of the day.

Homeless shelter in the heat

Valencia Red Cross has opened a special shelter for the city’s homeless during the heatwave this weekend. The centre, in a municipal building in Calle Santa Cruz de Tenerife, opened on Thursday and will be running until Monday between 11am and 6pm.

Those arriving at the hostel, are being offered water, food, a shower, hygiene kit and clothes. There are also leisure facilities and an area to rest out of the heat.

The temporary hostel in the Tres Forques area of the city, has room for 15 people and is attended by a specialist and about six Red Cross volunteers.

A mass vaccination of 16 to 19 year olds began this week and Friday saw a record number of daily doses given, 149,055 – although there is still a slight reluctance to get vaccinated among some young people, especially if they’ve already had Covid or are enjoying their summer holidays away from their vaccination centre.

Despite the government’s app to allow people to block off holiday dates, it hasn’t always worked properly: one mother explained how she completed the online form to avoid a clash with her holiday dates but she was sent appointments for her children regardless. Another young couple who were due to have their second jab explained that their holiday plans changed and they arrived back later than planned, so they missed their slot.

Others who have missed their appointments have told me that by going along to their vaccination centre at the end of the day, with their SIP card, they were able to get their jab without an appointment.

Yesterday, the health department announced that all the remaining people to be vaccinated would be given an appointment for the coming week. This includes people who have been on holiday, those who don’t have a contact mobile phone number and those who initially rejected the vaccine. This is also when 12 to 16 year olds are to be called for their first jabs. Speaking yesterday, Valencia president Ximo Puig said that the region was on track to reach its aim of achieving the group immunity it wanted by 9 October. ALSO READ: Covid-19 Vaccinations in Spain.

This week there have been 9,766 new infections reported, down from last week’s 11,327. There have been 16,175 all-clears, compared to last week’s 14,838. Deaths, however, have increased, with 36 this week, compared to 31 last week. Hospital admissions, on the other hand, have decreased, and as of Friday, there were 573 people in Valencia’s hospitals, compared to 622 last week, with 95 needing ICU treatment, also down on last week’s 113. Click here for all reports on: Coronavirus in Spain.

First human trial of a Spanish vaccine against Covid-19 authorised