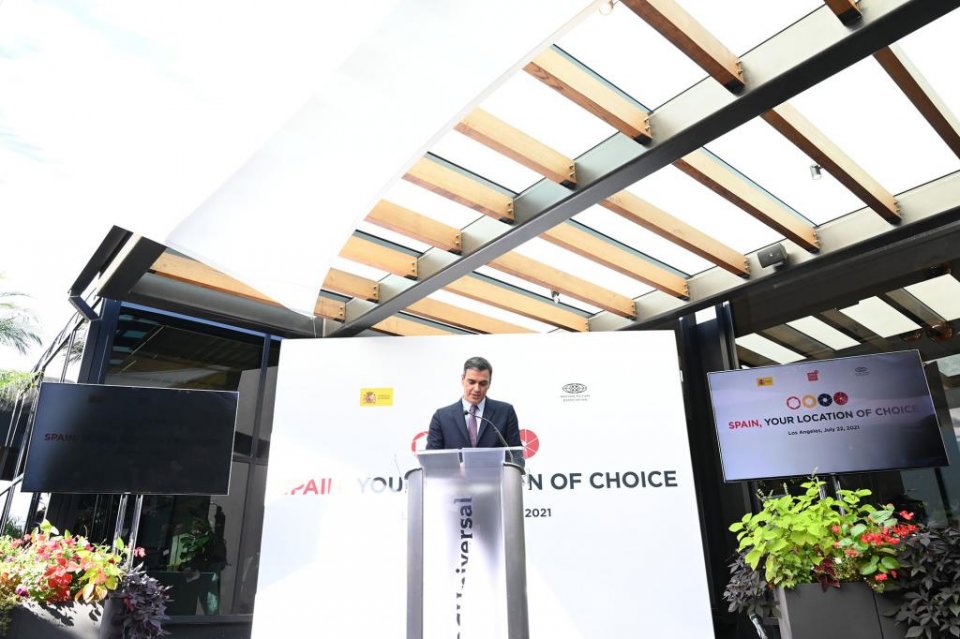 Continuing his tour of the United States that included a first stop in New York for meetings with investment fund managers, Spanish Prime Minister Pedro Sánchez then visited Los Angeles on Thursday to present Spain as ‘the Hollywood of Europe’, due to the country’s production facilities and tax incentives.

In New York, Sánchez had focused on Spain’s real estate market with fund managers, encouraging them to look at Spain as an attractive investment proposition in the sector.

In Los Angeles, he turned his focus on further developing the audiovisual sector, an industry that Spain has seen expand in recent years and is considered an important aspect of its post-pandemic recovery and future economic growth.

Proud of what Spain has already achieved in this sector, Sánchez wanted to highlight this to the key executives of the American audiovisual industry.

He met with executives from Netflix, HBO, Disney, WarnerMedia and Activision to present Spain’s impressive credentials.

Speaking about the attractiveness of Spain for the film sector, he said that ‘Spain has all the necessary administrative and fiscal incentives, as well as all the possible scenarios and locations to receive new projects and create new fictions. We aspire to become, and so has been said in some media, if you allow me to compare it, the Hollywood of Europe’.

The meeting, held at the NBC Universal studios in Los Angeles, allowed Sánchez to explain in detail about the attractiveness of Spain for production companies, including his government’s measures that are intended to attract production to Spain, including tax incentives and processing filming permits.

As part of his presentation, Sánchez explained more about his plans for creating a ‘Spain audiovisual hub’, which also includes a portal to be launched later this year that contains all the information that production studios need to decide whether to film in Spain or establish a base in the country. His visit to Los Angeles also follows on from Spain showcasing its production facilities at the recent Cannes Film Festival. Also read: Spanish film industry showcases its production facilities, as EU’s audiovisual hub.

He also explained that the government is arranging a scheme to enable US production workers to enter Spain more easily and avoiding mobility restrictions relating to the pandemic.

Speaking about how Spain was becoming increasingly attractive to companies around the world for film production, he also highlighted that Spain has the potential to overtake the UK, by taking advantage of the situation of Brexit. He applauded ViacomCBS for its recent move of its production centre from London to Madrid.

The presentation, headed up ‘Spain, your location of choice’, appeared to be well received, and Sánchez was encouraged by the response from the chief executives of the largest American film production companies, who expressed a desire to continue working in Spain and to consider larger scale projects in the future.

Earlier in the day, Sánchez had visited NASA’s JPL Jet Propulsion Laboratory, as part of his promotion of Spain’s technology in the aerospace sector, that is also a focus of the government’s Recovery Plan.

He also visited the University of California to promote the Spanish language and culture, following up on the government’s recent approval of the opening of a Cervantes Institute Centre in the state.

On the final day of his USA tour, Sánchez travelled to San Francisco to visit the Apple campus and the corporation’s CEO, Tim Cook, as well as with other CEOs and top executives from HP, Intel, Qualcomm, PayPal, LinkedIn and Levi’s in Silicon Valley.