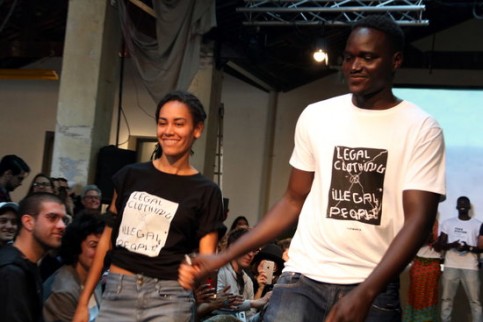 How to deal with illegal street vendors selling pirated luxury goods, a phenomenon known as Top Manta, has become a major issue in the campaign for the Mayor of Barcelona, with the elections taking place this Sunday 26 May.

The term ‘Top Manta’ borrows its name from how the unlicensed street sellers use blankets (mantes in Catalan) to carry their products from place to place, and put them on display in some of the most prominent tourist areas of Barcelona and in many other Catalan towns and cites.

Whilst the candidates for Mayor of Barcelona are split on the issue, the sellers themselves have since come up with an initiative to set up their own fashion label as an alternative to selling fake goods.

The fashion brand is also called Top Manta. Under the slogan ‘Legal clothes made by illegal people’ and in collaboration with the media platform PlayGround Do, the Union of Street Sellers (the Sindicat Popular de Venedors Ambulants de Barcelona) launched the first fashion show for its brand last year. It is believed to be the first initiative of its kind anywhere in the world.

The union gives a voice to many African migrants, mostly Senegalese, who have crossed the Mediterranean hoping to find work in Europe.

Many of the migrants do not have a work permit and so resort to selling fake clothes and accessories to tourists as their only viable livelihood.

Yet the activity is illegal, which means playing cat and mouse with the local police, a situation no-one is happy with, not least the migrants themselves.

‘How can an undocumented person, who can’t move around, or get benefits, or work, harm a white person with all their privileges?’ said Daouda Dieye from the Union of Street Sellers.

Four years ago, when Ada Colau became the Mayor of Barcelona, her left-wing local government opted for a softer approach, working with social services to find a way off the streets. However, many argue that this approach has now made the increase of Top Manta street sellers in Barcelona intolerable – and it has become a major issue in the election campaign.

Some of the local opposition parties have argued that the ‘softer approach’ only encourages more migrants to cross the Mediterranean, although they also agree that the sellers are not the threat they are often made out to be.

‘The greatest and most harmful [myth] about street sellers is that they’re violent, which serves as an excuse for a harder approach,’ said journalist and author, Yeray S.Iborra.

One thing all political parties agree on is that ideally there would be no street sellers on the streets, but how to get to that point is what sets them apart.

While some see law enforcement as the ultimate solution, others see the priority as helping sellers find alternative livelihoods.

Events organised last year to coincide with the launch of the Top Manta fashion label came with the simple message: ‘Nobody is Illegal.’ More than just a fashion show, there was a full programme to include opportunities for dialogue between fashion designers and activists, talks, and creative sessions.

The event also included a photography exhibition, live music, and Senegalese cuisine. Altogether, there were close to 300 attendees from NGOs, businesses, and social movements.

At the Top Manta fashion show itself, street vendors took to the catwalk, sporting the clothes they had designed and made in collaboration with the University Centre for Design in Barcelona (BAU).

Aziz Faye, a member of the union, said that the project had the objective of showing their value and contribution to the economy of Barcelona, a city they consider to be their own. The money raised went towards the brand and also towards the collective.

‘The Top Manta project is an example that social transformation is possible. We’ve offered all strategic and logistic support we could,’ explained the director of PlayGround Do, Cristian Palazzi. Palazzi also added that the event showed that by ‘providing tools and professional support, collectives like theirs, that are born businessmen, can create new opportunities to overcome marginalization.’

There are over 200 undocumented street vendors in the city of Barcelona alone, according to the council – but the figure could be much higher. Most of them are African immigrants without a work permit, who earn a living by selling replicas of luxury goods, such as shoes, watches, handbags and sunglasses.

With the race for Mayor of Barcelona concluding tomorrow, it remains to be seen whether the ‘softer approach’ will continue.

Junqueras: ‘They’ve suspended us in Spain, but won’t be able to in EU’