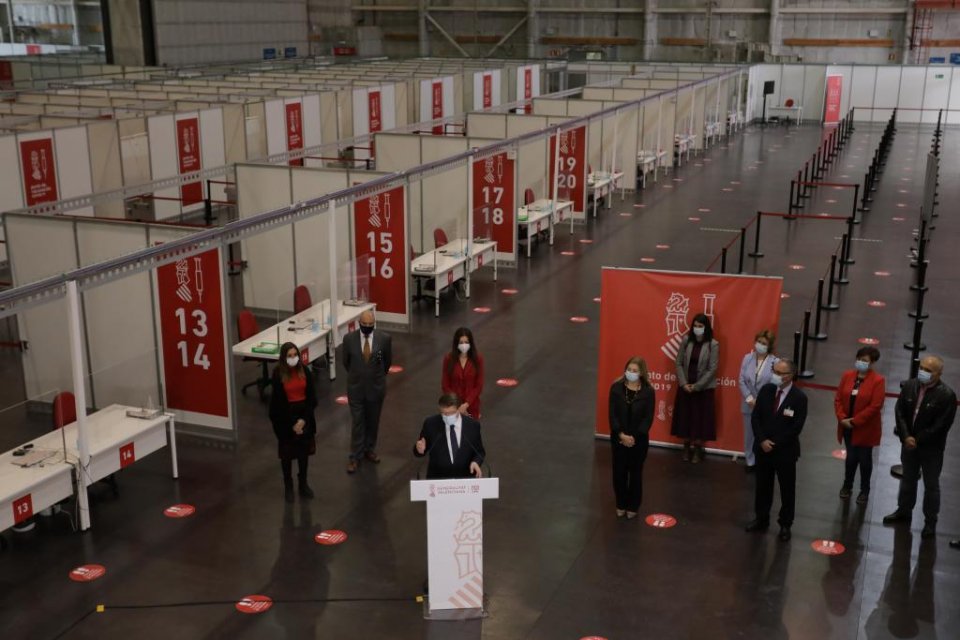 It’s been a week of good news from the health department with shorter waiting lists, fewer Covid-19 hospitalisations and more people now vaccinated than have suffered from Coronavirus since the start of the pandemic. The vaccination programme is gaining speed and the 66-69 year olds are finally to be called to get their jabs (see further details below).

The Valencian health department announced on Saturday that only 2.64% of the region’s hospital beds are now occupied by Covid-19 patients. Put another way: the current overall occupancy of beds is at 69.29%, of which 66.65% are non-Covid patients.

Announcing the figures, Valencian Health Minister Ana Barceló said that after more than a month with the 7 and 14-day incidence rate per 100,000 of population below 50, the low rate of hospital occupancy, both acute and critical, shows the region is well below the average. She added: ‘By being responsible, we have achieved some of the lowest hospitalisation rates in the whole country.’

Thanks to the lower levels of Covid-19 hospital admissions, waiting lists for operations have also been reduced. According to a health department announcement on Friday, waiting has decreased by 11% in the past month. The wait for an operation is 142 days, which is eight days lower than it was in March.

The vaccination programme continues to gain momentum and Valencian president Ximo Puig said on Tuesday that the speeding up of vaccinations will allow all those aged over 60 to be vaccinated by the end of May and not in June as had previously been planned. He said: ‘May will be a decisive month, to reach summer in the best possible conditions, to enjoy a good tourism season and start to reactivate the economy and society.’

Speaking on Thursday from Alicante’s mass vaccination centre in the city’s Ciudad de Luz, he announced that the region would be receiving more than 400,000 doses of vaccines this coming week. He said it was the largest delivery to be received since the vaccination programme began four months ago.

66-69 year olds will finally be called for Covid jabs

People born between 1952 and 1955 must be feeling somewhat left behind after seeing those older than them being given the Pfizer jab and those younger (60-65) being given AstraZeneca, but now it’s finally their turn.

From next week 66-69 year olds (both ages included) will start to receive SMS messages to attend a vaccination centre. The health department estimates it will take a few weeks and haven’t said which vaccine is to be used.

Anyone in that age range registered with a doctor should receive an SMS during the coming weeks. Anyone who doesn’t have a mobile number will be called on their land-line. To check your contact details are correct, you can follow this link: http://coronavirus.san.gva.es/es/web/vacunacion/datos-contacto

As of Friday, there were 246 people in the region’s hospitals, down from last week’s 286, with 56 needing intensive care treatment, also down compared to last week’s 63.

If we look back just three months to the first week of February, the situation was quite different: there were 34,133 new cases, 569 deaths with 3,497 people in hospital suffering from Coronavirus, of which 622 people needed intensive care treatment.

The body of a fourth woman has been found strangled and dumped in a beauty spot in Castellón, leading some to believe all four crimes are related. The authorities, however, say they are not.

The four bodies have all been found in the Valencia region within the past six months, all strangled and three dumped in irrigation channels, according to reports in various media.

The latest victim, whose body was found in a beauty spot in Burriana, Castellón, on Thursday 22 April, has been named as 42-year-old Johana Andrea, originally from Colombia, but who had lived in the town for 20 years. The autopsy showed signs of strangulation but the investigators say they have not established any link between this and three other similar crimes.

The other three victims had all been strangled and their bodies dumped in irrigation channels. The first was Alicia, a 45-year-old civil servant in the Justice department, who lived with her mother in the Hoya de Elche district. Her body was found in a channel just 200m from her home and the crime was believed to have taken place between 5 and 6pm on 6 November 2020.

The second and third murders were reportedly similar in the method of strangulation and disposal of the body. Florina Gogos, a 19-year-old Rumanian woman, was murdered on 8 January 2021 and her body found by a hunter on 30 January, in an irrigation channel between Silla and Albufera, just south of Valencia.

The third victim was 43-year-old Olga Pardo, whose body was found on 6 April by a farmer in an irrigation channel in the Valencian district of Masarrojos, to the north-west of the city. She had also been strangled. The Guardia Civil are investigating the crimes but haven’t yet found any links between them, so have ruled out a serial killer.

As storms battered the region last Sunday night, one of Benidorm’s famous skyscrapers received a direct hit, which led to a fire that started in a meter reading box. Fortunately nobody was hurt, but the moment when the lightning struck was caught on camera and the video has unsurprisingly gone viral.

Fire-fighters confirmed on Monday they had been called out just after midnight on Sunday to the 30-floor Balcon de Poniente tower block and by 1am Monday the fire was under control.

Five Guardia Civil patrols turned up in the town square of Alginet, in the Riba Alta county of Valencia, after they were alerted by residents who had seen hooded men with guns going into the town hall building.

The Guardia Civil agents surrounded the building but after a few tense minutes realised the only shooting taking place inside was for Powerboys – a new TV series due to be streamed in 2022.

The town’s mayor has apologised for not alerting the authorities that there would be filming taking place last Sunday morning.