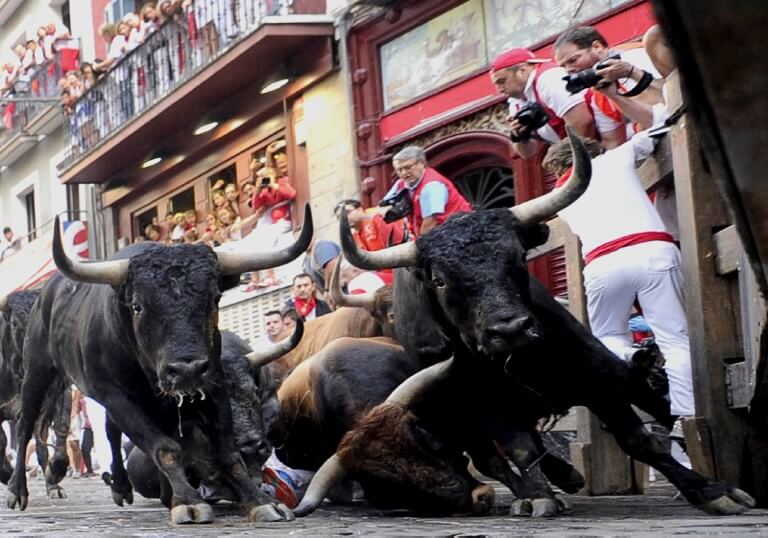 Local authorities in northern Spain’s Pamplona have officially cancelled the San Fermín bull-running festival for the second year in a row because of the Covid-19 pandemic, as had been expected.

The mayor of Pamplona, Enrique Maya, said that new Coronavirus outbreaks, a high occupancy rate in local hospitals and a slow rollout of vaccination jabs were the reasons for calling off the festival

‘The festival cannot be organised overnight,’ Maya said on Monday during a news conference. ‘This is very hard. I never thought that this could happen.’

The annual Running of the Bulls festival in Pamplona normally starts on 7 July but in 2020 it was suspended due to Coronavirus. The president of the Navarra regional government, María Chivite, had also earlier announced that it would not be possible to hold the event this yer – but no official cancellation had been announced until today.

The nine-day Pamplona festival was popularised by Ernest Hemingway’s 1926 novel, The Sun Also Rises, and prior to to last year’s cancellation it had last been called off during the Spanish Civil War in the 1930s.

In April 2020, the People for the Ethical Treatment of Animals (PETA) organisation had sent a letter to Maya, the mayor of Pamplona, offering the city €250,000 if it agreed to permanently end the bull-running and subsequent bullfights. Here we published an opinion piece (24 April 2020) by Elisa Allen, director of PETA UK: Opinion: why bullfights should stay cancelled after Covid-19

a tiny bit of good has come from covid if it forced the cancellation of the barbaric ‘running of the bulls’. Let’s hope this insanely cruel tradition is stopped once and for all.