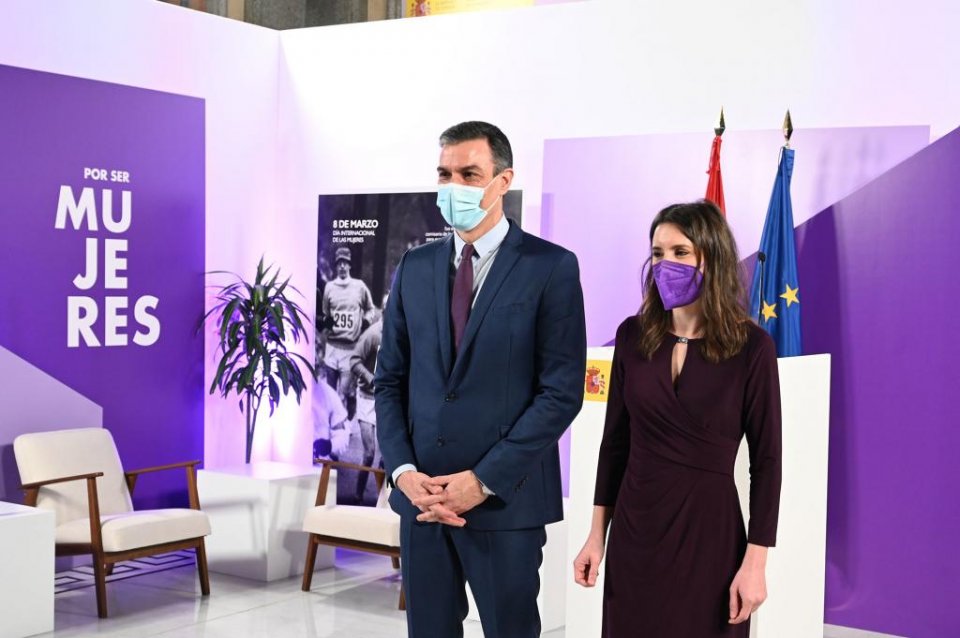 Traditional mass mobilisations and feminist strikes for International Women’s Day (8-M) in Spain have this year been replaced by virtual events and downsized rallies.

Demonstrations in Madrid were controversially prohibited last week by the Spanish government’s delegation in the capital. Although the decision was appealed by feminist movements, it was rejected by the Superior Court of Justice of Madrid (TSJM), maintaining that, in this case, the right to assembly conflicts with constitutional values such as public health.

Earlier on Monday some 100 protestors defied the court ruling by congregating in the city centre square of Puerta del Sol. It is reported that social distancing was maintained at the demonstration and banners called for the end to violence and repression against women, as well as fascism.

In lieu of the prohibited street gatherings, other feminist activists in Madrid have called for purple scarves – one of the symbols of the 8-M movement – to adorn balconies and windows across the city, in a gesture of support for International Women’s Day.

Spanish Prime Minister Pedro Sánchez and the Minister for Equality Irene Montero attended an institutional act to mark this year’s 8-M. The event held at the Equality Ministry paid particular tribute to the women who have been on the front lines during the Coronavirus pandemic.

Sánchez spoke of the government’s commitment to feminism and equality, stating that, ‘Today is 8-M, but the fight for equality has no date. Only through feminism will we advance. That is why we are a feminist government. We know that there is a debt: half of the population is deprived of freedom and dignity because they are women. Let’s work to repair it.’

Montero made special reference to the women, who in 2018, ‘brought the country to a halt with a historical feminist strike’. The minister stressed that moving forward the ‘agenda for change this country needs is a feminist agenda’.

Further to the act at the Ministry for Equality, the campaign #PorSerMujeres (For Being Women) was launched on the occasion of International Women’s Day. The campaign, headed by the ministry and the Women’s Institute, pledges to combat all forms of discrimination that women face throughout their lives, just for being women. It also highlights the consequences that women have and continue to suffer, on many fronts, as a result of the pandemic – overburdened with health, essential services and care work, greater job insecurity and labour poverty, as well as an increased risk of suffering from male violence.

In other parts of Spain, demonstration alternatives have been organised in order to avoid risk of contagion, including virtual performances, manifesto readings and bicycle rides.  In Toledo, feminist groups have called for a collective applause to take place emulating those made during confinement for frontline workers, but instead in honour of all women.

The Catalan government allowed for demonstrations to take place as long as they complied with safety measures. The biggest gathering, a static protest, has been organised in central Barcelona. Demonstrations have also been planned by feminist groups in the major cities in the regions of Aragon, Murcia, and the Basque Country, albeit with conditions including reduced numbers, limited event time, the use of face masks and social distancing.