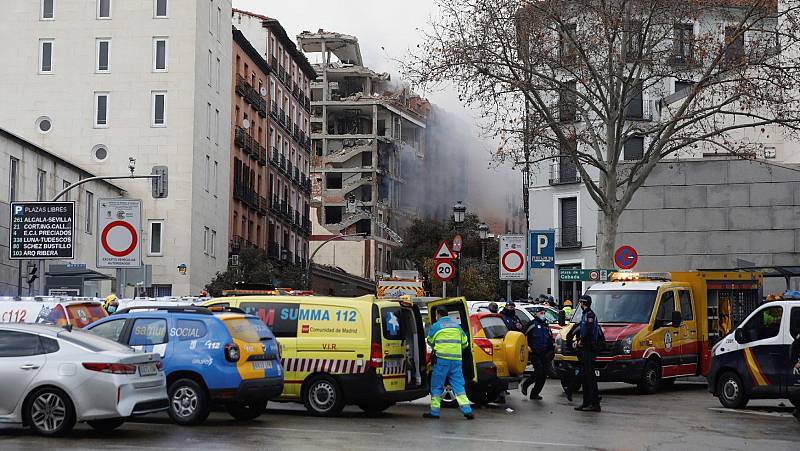 Four people have died and eight have been left injured following a large explosion in Madrid on Wednesday. The blast occurred just before 3pm, destroying four floors of a building, No.98 in the Calle Toledo in central Madrid, as well as ripping the façade off the building.

The fourth person to die was a 36-year-old priest, who was one of those injured during the blast in the La Latina district of Madrid. He died in hospital from his injuries in the early hours of Thursday, the Madrid archdiocese said in a statement.

The building that was destroyed belonged to the Church of the Virgin de la Paloma and San Pedro el Real located next-door. Two men who had been walking in the street and a repairman – who was reportedly fixing the building’s boiler on the fifth floor when the blast occurred – also died.

A man who was initially reported as missing was later confirmed to be the repairman who died in the blast, and who was a father of four. This was confirmed by the Spanish government’s representative for the Madrid region, José Manuel Franco, to radio Cadena SER. Neighbours had reported a strong smell of gas in the minutes before the blast, Franco also said.

The mayor of Madrid José Luis Martínez Almeida, who had arrived at the scene soon after the emergency services on Wednesday, confirmed at the time that ‘at least two people’ had died, and that the initial assessment by the authorities was that the blast was caused by a gas leak.

Images posted on social media immediately following the blast showed rubble and debris scattered across the street. Spanish media also reported that the building was an annex to a residential care home, ‘La Paloma’ residence, but that no injuries had been reported among the residents or workers at the centre. At least 15 cars were destroyed in the area.

Mayor Almeida also said that some mild damage had taken place at an adjacent school. Spanish public broadcaster TVE initially said the school was believed to be empty, but the mayor said that there were people there and had suffered no more than ‘scratches’. Aerial footage shared by Spain’s National Police [see below] showed rubble covering the schoolyard. Reports claim that thanks to the recent snow in Madrid, there were no pupils in the schoolyard at the time of the blast.

The Civil Protection agency in Madrid has asked for people not to approach the area of the explosion in order to leave access open for emergency vehicles.