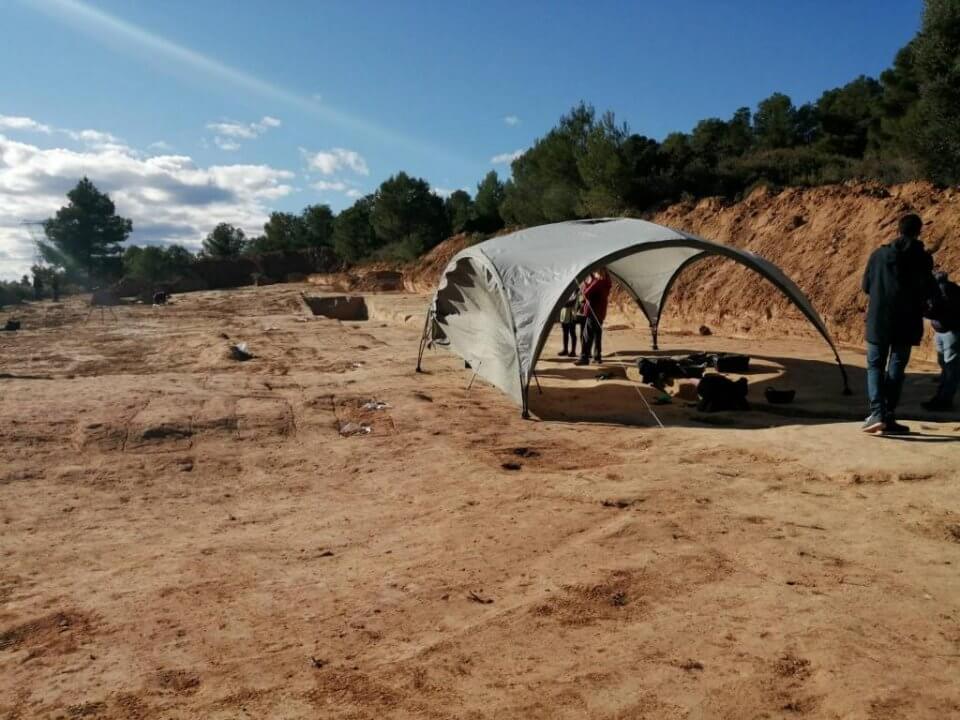 The Catalan government’s Department of Justice, in collaboration with the ‘Democratic Memory’ department, have located 61 graves on the grounds of an old country house, the Mas de Santa Magdalena, on the outskirts of Móra d’Ebre (Ribera d’Ebre) in the south of Catalonia. So far, archaeologists have recovered the remains of 13 individuals from the largest gravesite.

Due to its proximity to the front line of the Battle of the Ebro, one of the bloodiest conflicts of the Spanish Civil War (1936-39), Mas de Santa Magdalena was established as the site of a Republican army field hospital and triage during August-September 1938. Those who died in this makeshift medical centre or on the frontline, were buried in a mass grave in the surrounds of the estate.

Further investigation will determine if the graves – the majority two metres by half a metre in dimension – are individual or if multiple layers of burials exist. When work on the largest grave is complete, excavations will commence on the remaining burial sites. In addition to the human remains, archaeologists have also discovered a wartime deposit, with material from the hospital such as glass vials and tubes.

The excavations at Mas de Santa Magdalena form part of the Pla de Fosses (the ‘Mass Grave Plan’), the latest undertaking of a regional initiative evolving from the 2007 law of ‘Historical Memory’. The plan establishes the Catalan government’s objective to locate and, where appropriate, recover and identify the remains of people, both civilian and military, who disappeared or were executed and buried in mass graves during the Spanish Civil War and Franco’s dictatorship.

It is estimated that in Catalonia there are 20,000 people buried in graves dated from the Civil War and dictatorship. Official figures list some 500 mass graves in the region, however less than half of that number have actually been confirmed. Difficulties have arisen with the detection of exact burial sites, and it is the identification of uncovered remains that has been the biggest challenge for the institutions involved.

Excluding the provisional figures from the Mas de Santa Magdalena site, to date the ‘Pla de Fosses’ has enabled the recovery of the remains of 339 people. In total, eight of the bodies have been identified by means of a Genetic Identification Program. The program’s database contains the genetic profiles of relatives who have recorded their family members in the Catalan government’s Census of Missing Persons. By cross referencing DNA extracted from graves, the program facilitates the identification of the remains.

The Identification Program currently has some 2,500 DNA samples from living donors and about 300 genetic profiles from human remains located at unmarked mass graves. Each DNA extraction from remains costs approximately 1,000 euros – a complex and expensive process – whereas DNA donation by relatives is free and painless and is key to identifying the victims. Relatives who wish to provide a genetic sample must first record their missing family member with the Census of Missing Persons before registering at Vall d’Hebron University Hospital, which is in charge of extracting DNA samples.

In the case of the mass grave at Mas de Santa Magdalena, a historical document exists which has helped speed up the identification process of the deceased. Dr. Miquel Gras, who worked at the battlefield medical centre, recorded the names of the people who died at the hospital in a notebook which has served as one of the few clues in trying to identify the individuals buried at the site. The identity of some 30 soldiers were documented by the doctor, including the name of Josep Aubeso – a name which coincides with one of the cases listed in the Census of Missing Persons. Although the data from Aubesos’s family fits that of the record of Dr. Gras, the ultimate confirmation, however, will be achieved with the cross-examination of genetic data.

The Catalan government’s Department of Justice and the ‘Democratic Memory’ department aim to continue expanding on historical research throughout this year and next, updating concrete data on mass graves, as well as encouraging the families of missing persons to undergo the genetic identification test. The focus also includes the internationalisation of the plan, as it is estimated that in Catalonia there still exists between 3,000 – 4,000 missing International Brigades.