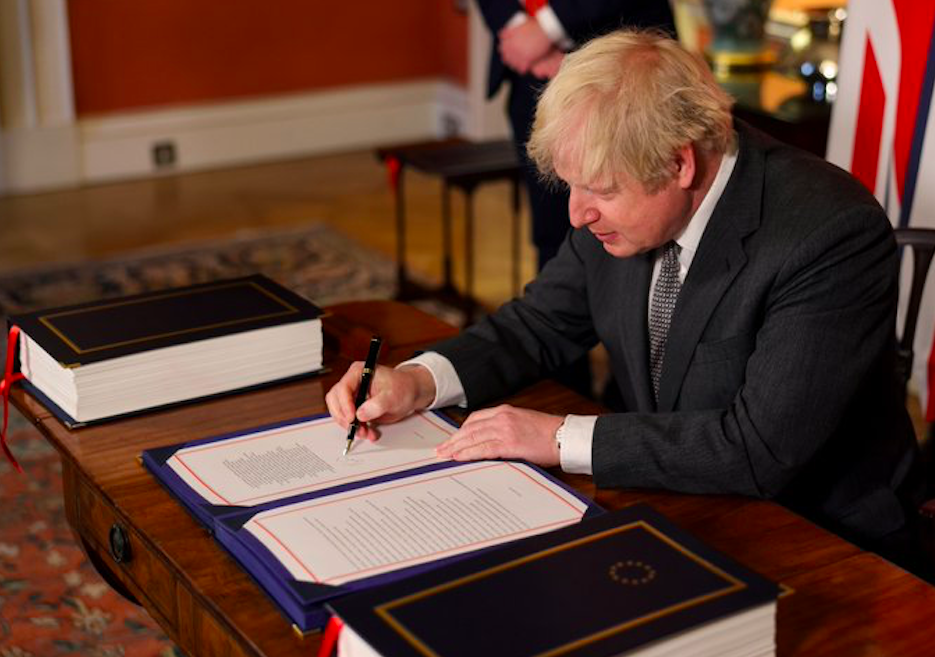 The post-Brexit trade deal was passed by 521 to 73 votes in the UK’s House of Commons on Wednesday. It will now pass to the House of Lords for approval later on Wednesday, before becoming law at around midnight.

The British government is pushing all stages of the 85-page European Union (Future Relationship) Bill through the Commons and the House of Lords in one day, before the EU trade deal takes effect at 11pm (UK time) on Thursday. At that hour – midnight in Brussels – the UK will be entirely out of the EU, and which follows on from an 11-month Transition Period since Brexit took legal effect, and over four years after the British public voted to leave in a divisive referendum in 2016.

With both the UK and the EU having signed the agreement today, it ends over four years of negotiation and safeguards nearly $1 trillion of annual trade.

Both sides have said it is a chance to begin a new chapter in a relationship forged as Europe rebuilt after World War Two, but which has often seen the UK as a reluctant participant in ever-tighter political and economic integration.

Johnson said in parliament that he hoped to work ‘hand in glove’ with the EU when its interests aligned, using the UK’s new-found sovereignty to reshape the British economy. ‘Brexit is not an end but a beginning,’ he said. ‘The responsibility now rests with all of us to make the best use of the powers that we regain, the tools that we’ve taken back into our hands.’

The trade deal has been criticised on several fronts since it was agreed on 24 December. The opposition Labour Party has said that it is ‘too thin’ and doesn’t protect trade in services, while UK fishermen complain that Johnson has sold out their interests. Northern Ireland’s status remains subject to much uncertainty. At the time of this report, an agreement on the status of Gibraltar is also still to be reached.

EU leaders Ursula von der Leyen and Charles Michel signed the trade deal in a brief ceremony earlier on Wednesday. The texts were then flown to London in a British Royal Air Force jet for the signature of Boris Johnson, and who signed the agreement at around 3pm. Then the RAF jet took a signed copy back to Brussels. The deal will be in place until the end of February, pending final approval by the European Parliament to make it permanent.

‘It is of the utmost importance for the European Union and the United Kingdom to look forward, in view of opening a new chapter in their relations,’ the EU said in a statement.

The new partnership agreement will regulate ties from 1 January on everything from trade to transport, energy links and fishing.

The full consequences of the agreement will only become apparent over the coming months, and UK businesses could still be grappling with the kind of customs red tape that they have avoided for decades in trading across the Channel.

From 1 January, there will no longer be free movement of people from Britain to the EU or vice versa.

The UK government is also pulling out of the European student exchange programme, Erasmus, that tens of thousands of young people have benefited from over the years. Many British owners of European holiday homes are also finding that unless they apply for residency permits, they will face limits on how often they can visit their properties.

ALSO READ: Q&A for UK Nationals living in Spain, with the end of the Brexit Transition Period

Click here for all our reports related to Gibraltar.