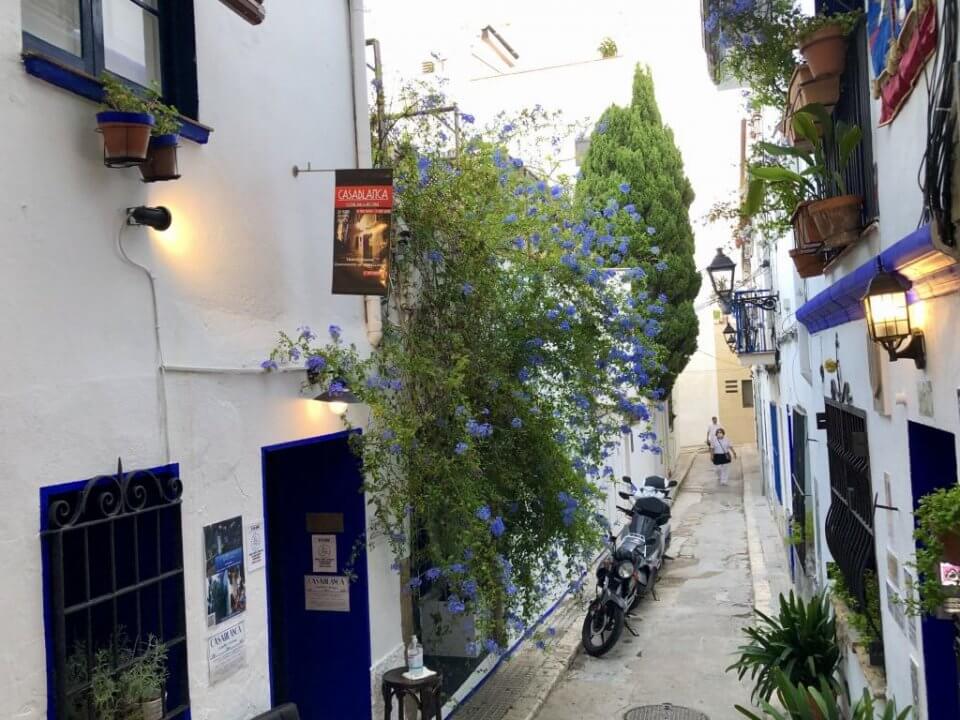 A warm mid-morning, on the first Sunday in October in the Time of Covid and, surrounded by the bright whitewash and deep blue of the old quarter of Sitges, I walk down the steps of the picturesque Carrer de Pau Barrabeig to the discreet entrance at Number 5: ‘Casablanca’.

The legendary, much loved and unique cocktail bar finally closed its business on 23 October, thus marking the end of an era – for it has made a unique contribution to the cultural and social life of a town that boasts a history of innovation, creativity and civic tolerance.

Casablanca, like many other establishments, has suffered a dramatic drop in economic activity during the pandemic. But as its co-owner Brandon Jones explains as he approaches his 69th birthday, and his partner Juan Font his 65th, the couple thought it was time to retire while still retaining many years of fond memories.

As the three of us sit down, at a safe distance, and during the bar’s daytime closure to the public, for our conversation in the intimate softly-lit interior of a bar that for over 21 years has drawn a loyal clientele from around the world, Brandon pours himself a glass of water. ‘It’s a bit too early for cocktails,’ he tells me with a mischievous sense of humour and ‘buen ambiente’ that has defined Casablanca since its inception, at least till Covid-19 limited its activities.

Brandon, according to another long-term Sitges resident and mutual friend, Dominic Begg, is a ‘cultural activist, extremely sociable and totally integrated in the local community. He probably knows more people in the town than many of the local politicians.’

He was born in 1951 in the Rhondda Valley, South Wales. The son of a coal miner, Brandon studied French at the University of Oxford supported by a grant, before going into the catering business and managing a number of bars and restaurants in London during the 1970s.

Brandon then went into the whisky business and discovered Catalonia. ‘That is how I met Juan in 1981 because I was in Barcelona and looking for an importer to Spain. I found the importer and I found Juan, the person I have shared the last 39 years of my life with.’

An iconic year for Brandon and Joan was in 1992 with the Barcelona Olympics, during which time they worked as the representatives and the facilitators for the BBC. ‘That was a glorious time for us and for Barcelona.’

Casablanca opened in 1998. That year, coincidentally, José María Aznar was in government and heading for a second term. Google was registered for the first time as a private company. The European Court of Human Rights was set up.

Brandon remembers: ‘We wanted to make Casablanca different from other bars, to have art exhibitions and local painters. The cultural aspect of it was very important. A lot of people think we are a gay bar but we are not, we are a heterosexual-friendly bar. Among our first customers were members of the Sitges Rugby Club (I am myself an ex rugby player) who mingled with younger lady members of  the Sitges English Theatre Club which I  co-founded 20 years ago. It was in Casablanca that other cultural initiatives were born, like the Irish-Catalan and Welsh-Catalan festivals, as well as Gay Sitges Link.’

Brandon last year produced a documentary entitled ‘The Gay History of Sitges’ which aimed to show how a village that in 1900 had a population of 3,000 – now 30,000 – can embrace homosexuality, a subject that is still taboo in some countries and religions. An early foreign visitor was Sergei Diaghilev, the Russian ballet impresario and founder of the Ballets Russes, who came to Sitges in 1914 with his lover, the dancer Nijinsky. ‘Why was he attracted to Sitges in 1914?’ he asks.

Even in the darkest days of Francoism, Sitges was a town that showed itself more tolerant than other Spanish towns, despite legislation defining prostitutes, vagabonds and homosexuals as criminals. There were various elements that came together to make Sitges a gay destination. ‘It was a prudent distance from Barcelona, and during a time when to be gay was something shameful and repressed, Sitges provided a space of freedom. When the Barcelona bourgeoisie had a son or daughter whom they regarded as a bit strange, they would have them sent to live in their second homes in Sitges … Then more and more people began to come from different parts of Europe,’ Juan tells me from behind the bar.

Brandon adds that in the 1950s, bars were not identified as gay bars as such, but became a meeting place for gays nonetheless. ‘They were bars known as flamenco bars, because people would go there to hear guitar music and songs, at a time when flamenco dancing and bullfighting were very much in vogue.’

In more recent years Casablanca not only became the birthplace for a digitally-linked information and support network – Gay Sitges Link – but also organised and hosted numerous fundraising auctions in support of various causes, ranging from ‘Sitges Canta’, the much-loved local choir, ‘Clowns without Borders’ (a Spanish humanitarian organisation of clowns that perform for free for children affected by war), to animal welfare and the victims of natural disasters in Chile.

‘One of the great things about Sitges is its creativity, and its festivals. Hopefully the creativity and the festivals will come back in spite of Covid-19. But it will need promotion and investment and with projects that are done properly, with respect for the environment and local culture,’ Brandon says.

We have been conversing, with Brandon and Juan leaning at a bar filled with a library of bottles, and I in front of a wall covered with framed photographs of clients both real and imagined. The leading actors of the 1942 wartime movie that gave the bar its name are of course there with us: Humphrey Bogart, Ingrid Bergman and Claude Rains, along with a suitably eclectic additional selection of celebrities from the world of arts, including the Spanish dancers Cristina Hoyos and Antonio Amaya, and the international film stars Bette Davis, Sean Connery and Alec Guinness.

Among the famous that Brandon recalls visiting the bar more than once during their lifetimes are the footballer Johann Cruyff, the British actresses Honor Blackman and Fenella Fielding, and the BBC’s head of sport, fellow Welshman Cliff Morgan, with whom he sang Calon Lân one lively night.

‘When people heard we were closing, including fellow bar owners, they said “How sad!”, because Sitges is going to lose another attraction for many people and a part of  the glamour is going to leave the town, they say.’

It is time to cling on to good memories and hope that better times will return. So, what are the moments Juan and Brandon recall with greatest pride and joy at Casablanca?

‘The Nights of Summer in September were always magical, with a great atmosphere, and the French Nights with pâtés and cheeses one of the most popular,’ says Juan, whose ‘Stuffed Lentils’ on New Year’s Eve are also legendary.

‘I like Carnival, a time when friends coming back to Sitges dress in outrageous clothes, with a great sense of humour and creativity. And because I am Welsh, I enjoy singing. I like spontaneity in the bar. Juan and I enjoy helping people, a sort of tourist board, and finding enjoyment in doing so,’ says Brandon. ‘We take great enjoyment in introducing newcomers to Casablanca’s established clientèle and many long-lasting friendships have begun here.’

We have been talking for over an hour, beyond 1pm. ‘Now it’s time for a cocktail,’ declares Brandon.

What would I like? Juan has a mojito with only fresh ingredients as his speciality. Brandon has his own creation from over 22 years ago – Cointreau, Brandy, Bailey’s and white mint liqueur – which he calls Kelly’s Nightcap, although he also offers an ‘unusual twist’ to a Bloody Mary, with Manzanilla sherry and horseradish condiment added to the tomato juice, Perrins sauce, tabasco, vodka and lemon juice.

I opt for simplicity to help activate my appetite – a classic Daiquiri – rum, cane syrup, and a mixture of Roses lime juice and freshly squeezed lime. And in memory of my late father, Tom Burns, the subject of my book Papa Spy. It was his favourite drink when working for the Allies out of the British Embassy in Madrid. He used to spy on Nazis in war time North Africa, now and again visiting a night club in Tangiers that later inspired a movie and a community of friendship in Sitges.

I will miss Casablanca. It will always bring to mind the phrase coined by Shakespeare: ‘All the world’s a stage, and all the men and women merely players.’

This article was first published in Catalan in L’Eco de Sitges.

Jimmy Burns Marañón, OBE, is a journalist and author, chairman of the charity the British Spanish Society and editor of its magazine, La Revista.

We always enjoyed our visits to Casablanka in fact we have poster signed by Brandon and Juan framed on our wall at home here in Oxford. The bar was unique and a fantastic atmosphere a credit to Brandon and Juan.

Dear brandon, dear juan,
I am very sad that the Casablanca is closed.
But after all these years and considering the age of the
Owners and the circumstances of the last three years, it is only too understandable that they have retired.
The Casablanca was a Sitges institution and everyone who walked in was greeted warmly. This made it very easy for everyone to get in touch. Brandon with his open-hearted manner and Juan with his sometimes very dry humor. Unbeatable!
the unusual thing was the atmosphere and that’s why i said to brandon very late one night: i would do that
consider Casablanca the best bar in the world – which I repeat here.
Warm regards to you both and may you be well.
Klaus from Germany