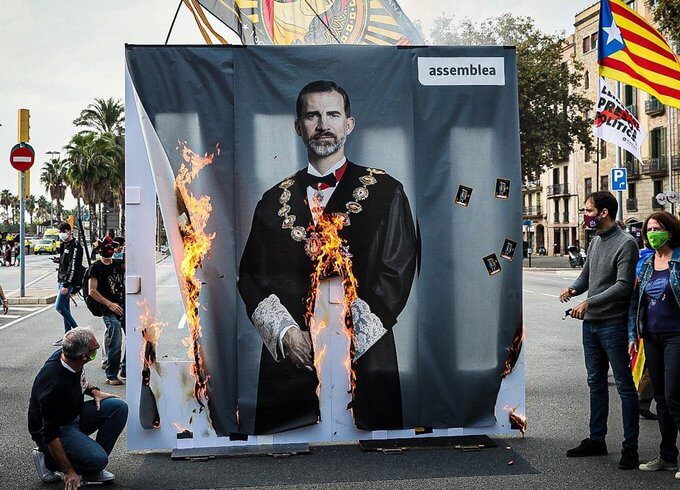 Protests were held in Barcelona on Friday morning against the visit of Spanish king Felipe VI for an awards ceremony held at the Estació de França train station in the centre of the city. The monarch was accompanied by Prime Minister Pedro Sánchez.

The protests were organised by various Catalan political groups and pro-independence civic organisations, including the Catalan National Assembly (ANC), who wanted to convey their message that ‘Catalonia has no king’.

The Spanish monarchy has had a poor rating amongst Catalans for many years, but the fallout between many Catalan institutions and Felipe VI increased after the televised speech he gave on 3 October 2017, two days after the Catalan independence referendum. Nine Catalan politicians and activists were later jailed for between 9-13 years by Spain’s Supreme Court in October 2019, convicted of crimes of sedition and misuse of funds for their roles in the referendum.

During his speech on 3 October 2017, Felipe VI had been critical of the Catalan independence movement, and didn’t mention the violent crackdown against voters by the Spanish National Police and Guardia Civil – that only two days previously had been broadcast around the world. The monarch was subsequently widely criticised for not adopting a neutral stance in the conflict.

According to an approval poll carried out by the Catalan government’s Centre for Opinion Studies (CEO) in July this year, the Spanish monarchy achieved just 1.59 points out of 10, its worst score since 2014, coinciding with the corruption scandals surrounding former king Juan Carlos I that resulted in him leaving Spain for the United Arab Emirates.

The visit of Felipe VI to Barcelona on Friday was to attend an awards ceremony held by the New Economy Week. Ahead of the visit, on Thursday evening, the ANC had organised a ‘photograph-burning protest’ in the Plaça Sant Jaume, home to the headquarters of the city council and Catalan government. Photos of the monarch were also burned in front of town halls and other places across Catalonia. Protests involving the burning of images of the royal family have taken place in Catalonia various times in the past.

On Friday morning, a huge police presence of Mossos d’Esquadra agents formed to protect the area surrounding the Estació de França train station, where the awards ceremony was held. Protests groups, including the Committees in Defence of the Republic (CDRs), gathered to show their rejection of the monarch.

A human chain with each participant maintaining social distancing measures was also formed, starting from near the railway station and aiming to extend to the Christopher Columbus monument at the bottom of La Rambla.