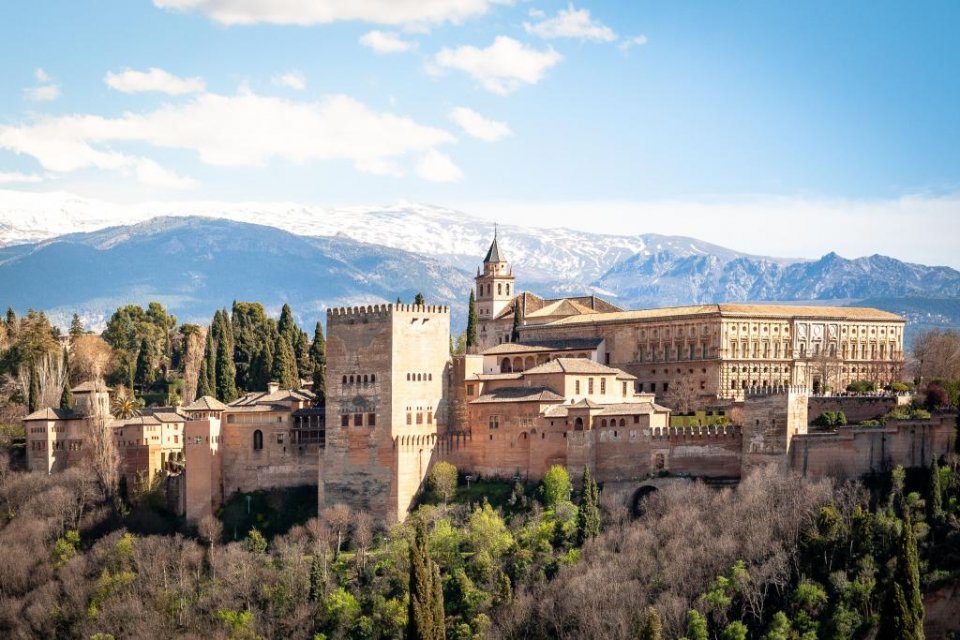 I am pretty sure that I fell in love with Spain properly about seven years ago – looking out over the spectacular landscape from a balcony of a small rural hotel near Ronda. After a dinner in the restaurant, drinking a local tinto and watching the sun disappear.

Mind you, it could have been during an evening stroll along the cobbled streets of Sevilla, the heat of the day still rising from them. Between tapas of pig’s cheeks, slowly cooked in sherry and super crispy, deep-fried baby squids – our palates cleansed by huge goblets of sub-zero gin tonics.

It also could have been when we were dining in an over-priced and under-delivering tourist restaurant in the Albaicín of Granada.

That disappointment being completely saved by the tableau of the Alhambra in front of me, something that could never fail to transfix any viewer. In reality, it must have been all of these experiences and more.

I guess most people reading this will have similar personal memories and emotions of Spain, or perhaps want to have.

It seduces you with its open heart, vibrant spirit, generous plates and even more generous measures.

I am very excited to have been asked to occasionally share my foodie thoughts, recipes and inspirations with you on Spain in English.

I am Alex and I think I have always had food in my veins.

My French father came to the UK to further his career as a chef in 1969 – and he met my mother who was working at the reception in the same hotel.

Growing up, I was fascinated by the noise and heat of the kitchen and – despite warnings about hours and pay – I left school to work in a well-regarded local restaurant.

Just to keep things in the family, my sister’s partner is also a chef! I worked in and around Manchester and Cheshire until my long-time partner Adrian and I decided to make a move to France 15 years ago.

We moved to open our Yoga Holiday retreat centre called Les Passeroses, which we run during the summer months. We look after the guests and cook all the vegetarian and vegan food, which is perfect for a week of yoga.

It is incredibly important to bring everyone together around the dinner to be nourished – not only by the food, but by the social interaction around it.

We finally brought out a long-called for cookery e-book this year, featuring some of the most popular recipes which are take inspiration from all over the world, including – of course – Spain.

Over the years, several visits to Madrid and Barcelona to stay with friends opened my eyes and belly to how Spain lives through its food and drink culture.

Madrid at New Year was probably the coldest I have ever been, but the churros con chocolate were worth braving the icy rain for. The early – okay, mid-afternoon recovery from a night’s clubbing in Chueca was helped immeasurably by huevos rotos.

Chunks of potato baked in olive oil in a deep enamel pan are topped with eggs – cracked messily all over – liberally strewn with slices of jamón and finished with a bit more olive oil.

Crispy, soft, eggy, stodgy, salty and full of Vitamin D – it’s a contender for the world’s most satisfying hangover cure.

A rare chance for a holiday in early summer seven years ago allowed us to discover Andalusia and authentic Spain for the first time.

Sevilla was our starting point – and a room in the stunning Hospes Las Casas del Rey de Baeza, a traditional 18th century building, certainly set the tone. It has a cool cobbled internal patio surrounded by wooden walkways, unsurprisingly reminiscent of Moroccan riads.

Ronda wowed us with the touristic hordes, dramatic setting and a couple of superb restaurants. The family owned and run Casa Maria looks nothing special from the outside, but we have found that often the best things in Spain are the most unassuming or well-hidden.

The produce on offer is the very best quality and cooked mainly on the plancha. Ask for ‘un poco de todo’ and just eat what comes. That reminds me – I must write a review.

That first holiday finished in the old town of Málaga, which was buzzy but the food was way too tourist-oriented for us, with the notable exception of an Argentinian small plates place. I came to realise two things during this trip – I wanted more of this region and Tempranillo is definitely ‘my’ grape!

Unable to stay away, we returned in a matter of months, taking in Archidona, Granada and – unsurprisingly – the Alhambra, before heading to the seaside towns of the Costa Tropical.

Fortune led us to a lesser-known costal town called La Herradura, so named because of its horseshoe shaped bay. Staying at the top of the town, up a VERY steep slope, we had a wonderful view of the surrounds. We both agreed something felt ‘right’.

It’s a very Spanish town that remains busy throughout the winter, especially with families from Granada, who make the drive down on Sunday afternoons to share paella or wood-cooked fish at the chiringuitos.

It’s a long and extremely convoluted story as to how we finally got to own a small house in the lower part of the old town, after three years of renting it. Let’s just say deeds and family disputes all played a part, but we got there in the end.

Being ensconced for the last three winters has given us a taste of Spanish life that we have become determined to take full advantage of.

I spend my time finding new places to visit for their amazing produce, be it the best jamón serrano in the south or a bodega producing new wines using old-fashioned methods.

We love cooking for and sharing with our new friends and neighbours, as well as looking for the best restaurants in the area.

We are now married after 28 years together and while sitting on the roof terrace, looking at the sea and mountains, we feel so lucky to have found Spain and La Herradura.

‘La H’ is where I am already putting down roots, allowing the sun to infuse my body, thoughts and food.

When normality returns, this will become our home and the starting point of a new journey, travelling deeper into all that Spain can bring to a plate (and to a glass). I aim to share some of it with you on Spain in English.

Alex Gonnord-Luty is a chef and Hispanophile currently working and living in South West France with his husband Adrian, cooking and running their yoga retreat centre during the Summer. They have a second home in La Herradura near Almunecar on the Costa Tropical, where they spend a lot of time and want to relocate to in the near future. He has written a cookery book and blogs about Spanish food, wine and culture on his website Spain on a Plate.