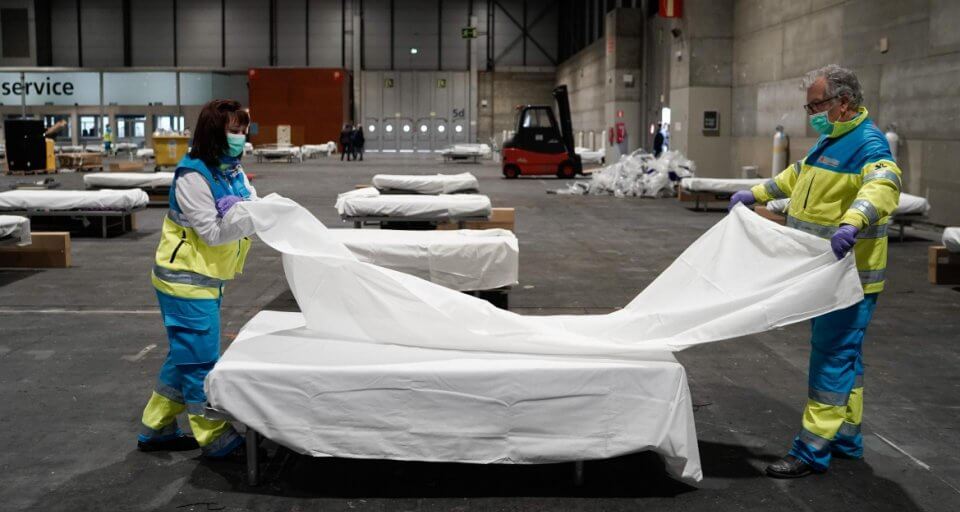 Around 5,400 healthcare workers in Spain are now known to have tested positive for Coronavirus, according to Fernando Simón, the director of the Health Ministry’s Coordination Centre for Health Alerts – representing around 13% of the confirmed cases.

Simón also explained that in general, the symptoms of Coronavirus appeared between 5-6 days after infection, and those who suffer complications normally end up in hospital 5-7 days after the start of the symptoms.

Simón said that he believes the effects of the ‘tough measures’ that have been put in place to counter the crisis in Spain will be felt in the coming days: ‘I don’t know if it’ll be tomorrow or Friday – but their impact will be felt soon.’

He also justified the Spanish government’s decision to not impose a 100% lockdown, in particular in Madrid or Catalonia, arguing that the measures the authorities have put in place are already some of the world’s strictest.

As figures in Spain continue to spiral, Madrid could now pass Lombardy as the worst affected region in Europe, according to an analysis of the current statistics, compiled by John Burn-Murdoch at The Financial Times.

However, the figure just released for Tuesday from Italy shows 743 deaths in the past 24 hours – now a total of 6,820.

Scientists believe that countries such as Spain and France are following in Italy’s footsteps with a lag of a few weeks.

On Tuesday it was also announced that Spain’s armed forces are asking NATO for humanitarian assistance to fight Coronavirus. Despite the lockdown imposed on 14 March, deaths and infections continue to rise across Spain, with the Spanish Military Emergencies Unit (UME) already called in to join efforts to curb the spread.

Spanish government spokeswoman María Jesus Montero told a news conference, ‘We are aware of just how hard it is to prolong this [lockdown], but it is absolutely imperative that we keep fighting the virus in order to win this battle.’

The surge in confirmed cases has brought Spain’s medical system to the brink of collapse.

In Andalusia in the south of Spain, Rafael Aguilera, the mayor of the small town of Alcala del Valle, pleaded for help after reporting 38 of 42 residents at the local nursing home had tested positive for Coronavirus, along with 60% of the staff.

‘The virus doesn’t kill people … what’s killing people is the system,’ he said. ‘Our seniors need a permanent solution now. We need oxygen, ambulances and hospitals,’ he said in a video that was posted on the town’s Facebook page. ‘A person died in our arms because we couldn’t get hold of oxygen.’

DEATHS AT SOME RETIREMENT HOMES TO BE INVESTIGATED

Spanish soldiers who have been deployed to help fight the Coronavirus outbreak have been discovering elderly patients abandoned, and sometimes dead, at some retirement homes in Spain.

‘We are going to be strict and inflexible when dealing with the way old people are treated in these residences,’ Defence Minister Margarita Robles said in a recent TV interview. ‘The army, during certain visits, found some old people completely abandoned, sometimes even dead in their beds,’ she added.

Retirement homes are ‘an absolute priority for the government’, Spain’s Health Minister Salvador Illa also told a recent press conference. ‘We will exercise the most intensive monitoring of these centres.’

Spain’s Defence Ministry has confirmed that bodies have been found at several elderly care centres. At some of these locations, it has been reported that some staff members walked out after Coronavirus outbreaks were detected. An investigation has been launched, Spain’s general prosecutor has announced.

The chief public prosecutor in Catalonia has also ordered an investigation into the deaths of 22 people on account of Coronavirus in two elderly care homes in the region, with the most recent death reported on Tuesday.

The care homes are in Capellades, where 13 elderly people have so far died due to the virus, and in Olesa de Montserrat, where there have been nine deaths.

Spain’s defence chief of staff Miguel Ángel Villarroya announced at the Monday morning press conference in Madrid that the military were to carry out further ‘disinfections in 135 areas and in 92 elderly centres’.

Villarroya also said that members of Spain’s Military Emergencies Unit (UME) continued to work at Madrid’s IFEMA exhibition centre, which was being turned into a hospital, eventually to have 5,500 hospital beds as well as an intensive care unit. The military was also offering support to install a homeless shelter at the Feria de Barcelona‘s exhibition centre.

It was also announced yesterday that the ice rink at the Palacio de Hielo (Ice Palace) within a shopping complex in Madrid has been turned into a temporary morgue. This is to help deal with a surge in deaths in the capital, according to Madrid City Hall, with the city’s funeral services currently overwhelmed.

‘We don’t have the logistical capacity to carry out all the burials and cremations at the rate at which people are dying,’ the Mayor of Madrid José Luis Martinez-Almeida said on TV..

In Catalonia, a ‘Hotels Salut’, or ‘Health Hotels’ project was announced on Sunday by Alba Vergés, responsible for the Catalan health department. The project sees hotels collaborating with the health authorities to provide beds for Covid-19 patients with mild symptoms, as well as for people instructed to self-isolate but who are unable to do so at home.

The scheme offers extra beds to relieve the strain on hospitals, and means that hotel staff can retrain and continue working. The first hotel where this measure has been applied is the Cotton House Hotel in Barcelona.

Other hotels, including the Diagonal Centre and Rigoletto, are being used by health professionals and the health service’s staff.

On Monday, the Spanish Health Minister Salvador Illa confirmed the decree forcing all tourist accommodation in Spain to close would be supplemented by a new order, allowing hotels tending to Coronavirus patients to remain open.

During the first phase, 500 hotel beds in Barcelona will be made available to the health service, with plans to expand both within the Catalan capital and to other cities as necessary. The Catalan health department also plans to double the number of Intensive Care Units (ICUs) in Catalonia by the end of this week and triple them by the end of next week, in order to treat severe cases of Coronavirus.

The health service’s director, Adrià Comella warned they have to prepare for ‘worst case scenarios’ and ‘very tense situations’ in the next three or four weeks, but urged people ‘not to lose hope’.

The Catalan government, led by Quim Torra, has been asking the Spanish prime minister Pedro Sánchez to impose a total lockdown since 12 March.

Torra asked for it again on Sunday in a video-conference call with Sánchez and other regional presidents. Torra was joined by the presidents of the Madrid, Murcia and Andalusia regions in calls for an enhancement of the lockdown. Murcia ordered the halt of all non-essential activity, pending approval from the Spanish central government.

CORONAVIRUS ACROSS THE GLOBE

British Prime Minister Boris Johnson followed other European countries on Monday evening by ordering most non-essential shops and services to close in the UK, as the death toll reached 335.

Johnson said people must stay inside except to buy essentials and take daily exercise, but many questions remain about how the new rules will be enforced.

During Tuesday India – with a population of some 1.3bn people – also joined countries ordering their citizens to stay at home, which now puts a third of the world on lockdown as the Coronavirus pandemic continues. Japan is also postponing the Olympics until 2021.

Indian Prime Minister Narendra Modi‘s ‘total lockdown’ call has doubled the number of people around the globe who are now under some form of movement restriction in order to slow the spread of the virus to more than 2.6bn people.

‘To save India, to save its every citizen, you, your family … every street, every neighbourhood is being put under lockdown,’ Modi said, announcing this would go into effect at midnight, Delhi time.

Also on Tuesday, G7 finance ministers and central bank chiefs vowed to ‘do whatever is necessary to restore confidence and economic growth and to protect jobs, businesses, and the resilience of the financial system’.

Swedish climate activist Greta Thunberg posted on Instagram on Tuesday that it was ‘extremely likely’ that she had contracted Coronavirus, after experiencing several symptoms following a trip to central Europe.

As of Tuesday, Sweden had reported 2,272 confirmed cases. Thunberg said she had not been tested, but that it was extremely likely she had the virus, ‘given the combined symptoms and circumstances’. She also said she had ‘basically recovered’ but cautioned others, saying she ‘almost didn’t feel ill’.