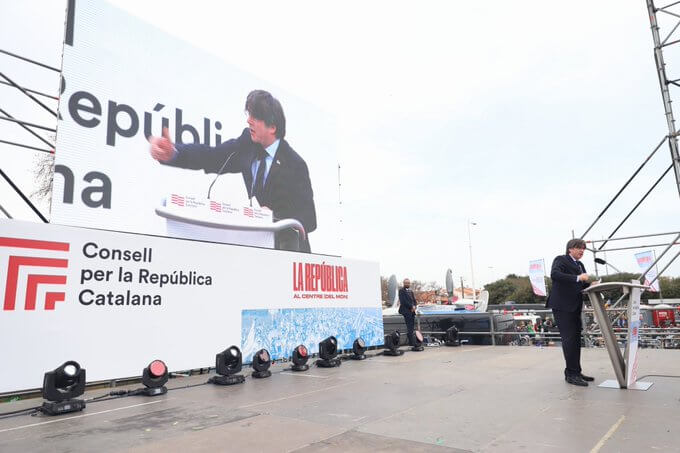 Former Catalan president Carles Puigdemont participated in a vast political rally in Perpignan in southern France near the Spanish border on Saturday, with over 100,000 pro-independence supporters in attendance.

Many attendees were caught up in traffic jams at the border, reportedly caused by Spanish police checks, and could finally not get access to the site at the Parc de les Exposicions, which by the time they arrived was already full.

The rally was organised by Puigdemont’s private organisation, the Council for the Republic, and it was the closest that he and two other exiled Catalan leaders, Toni Comín and Clara Ponsatí – the three of them all now MEPs – had been to the Spanish border since they left for Belgium shortly after the October 2017 independence referendum bid.

Perpignan is also the capital of the region of Rousillon, ceded to France by Spain in 1659, and it is often referred to as French Catalonia or even Northern Catalonia.

Arriving to the region on Friday, Puigdemont tweeted a photo of himself with Ponsatí. ‘We have entered Catalonia,’ he wrote. ‘We are very happy and emotional of setting foot in Catalonia as free people, after two years and three months living in exile. Thanks to everyone who made it possible.’

On Friday evening Puigdemont attended a match of USAP Perpinyà, the rugby local team, and on Saturday morning, he was greeted by the mayor of Perpignan, Jean-Marc Pujol, in the city hall, alongside the current Catalan president Quim Torra.

Puigdemont went into exile in late October 2017, a few days after the Catalan declaration of independence. He has not returned to Catalonia since and currently faces an arrest warrant in Spain. Although he lives in Belgium, he has travelled to several EU countries during this time.

He was elected as an MEP in the May 2019 EU election, but it was not until an EU court ruling in December 2019 that he was able to take office. He had not set foot in France until his immunity as an MEP was confirmed, as he had feared France would extradite him.

After two failed Spanish extradition attempts, he faces a third one but the procedures are suspended until the EU parliament decides on whether to waive his immunity.

The former Catalan health minister Toni Comín and the former education minister Clara Ponsatí have similar stories, with her having exiled in Scotland.

Ponsatí works at the University of St Andrews. She is fighting extradition from Scotland after a new European Arrest Warrant was issued by the Spanish authorities on charges of sedition for her role in the October 2017 Catalan independence referendum. The MEP status will now also affect the extradition hearing, scheduled to start from 11 May in Edinburgh.

During the event in Perpignan on Saturday, Puigdemont called on citizens to ‘prepare for the final struggle’ to achieve independence. He also urged the public to return to the spirit of the 2017 independence referendum and said the cause has to ‘overcome mistakes, hesitations and weaknesses’.

He added that there was a need to make a network of branches of his Council of the Republic organisation, so that it ‘effectively controls the territory’.

Also in the rally, Comín asked ‘what Spain’s government has to say’ about the Belgian, German, Scottish judges’ stances on the Catalan leaders’ extradition requests. He also mentioned the EU court’s decision accepting several jailed and exiled leaders as MEPs, such as the jailed leader Oriol Junqueras.

Ponsatí accused Spain of ‘tricking’ the independence camp with dialogue. ‘They never fulfill promises,’ she added.

Also during the rally, an audio message from Junqueras was also played. The jailed Esquerra Republicana (ERC) party leader asked citizens to ‘not give up’ in the independence cause. ‘We have to be more and more diverse,’ he added, saying it was only due to Catalonia’s push that Spain has engaged in dialogue.

On 14 October 2019, nine of the Catalan leaders who had remained in Spain after the 2017 referendum were sentenced to jail terms for for the crime of sedition, sparking weeks of protests in Catalonia, some of which turned violent.

The concept of the ‘bilateral negotiation table’ dialogue process was a prerequisite for the pro-independence ERC party abstaining in the investiture vote for Sánchez to become prime minister again in January, thereby facilitating the Socialist (PSOE) leader taking office again.

The PP’s Cayetana Álvarez de Toledo has sent a letter to the French Assembly president, Richard Ferrand, urging the chamber to make an institutional declaration against the pro-independence rally.