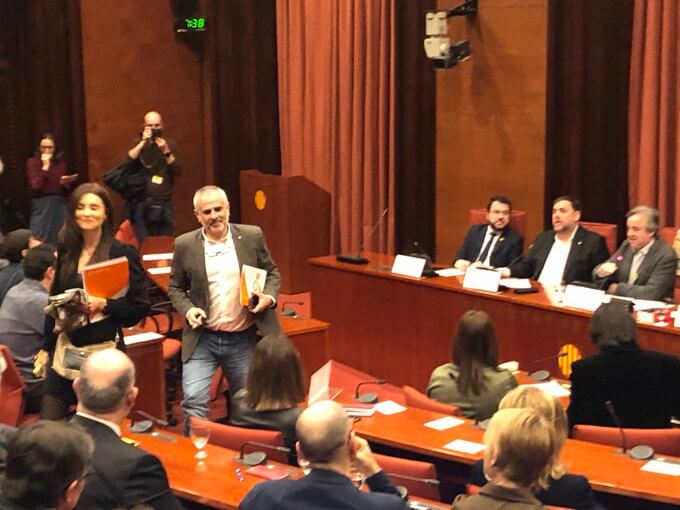 Six of the nine Catalan leaders who were sentenced to jail by the Spanish Supreme Court for their roles in the 2017 Catalan independence referendum, were present at the Catalan Parliament on Tuesday for the first time since they were convicted.

Oriol Junqueras, Joaquim Forn, Jordi Turull, Josep Rull, Dolors Bassa and Raül Romeva were all required to testify in a parliamentary committee hearing regarding the enforcement of direct rule under Article 155 from Madrid that was imposed in late October 2017.

The Catalonia justice department had given permission for their attendance and all six were taken by the Catalan police (the Mossos d’Esquadra) from prison to the parliament building in Barcelona, where they were welcomed with applause and chants of ‘freedom’ by some of their political colleagues.

They were also welcomed by the Catalan president, Quim Torra, and the speaker, Roger Torrent.

During his opening statement, Oriol Junqueras told the committee that ‘organising a referendum is not a crime because it isn’t in the penal code.’

‘Backing independence and the republic is not a crime,’ he said. ‘They get confused between justice and vengeance. Vengeance doesn’t intimidate us, it doesn’t scare us, prison is another step towards freedom.’

In the line of his Esquerra Republicana (ERC) party’s strategy, Junqueras said that despite his imprisonment, they won’t ‘give up on dialogue’.

‘Our job is to talk to everyone, with a good tone, with a smile,’ said the former Catalan vice president.

With regards the application of direct rule, he said that it had harmed Catalonia’s social policies and economy, and it was ‘an excuse for the imprisonments’.

In the round of responses, the Ciudadanos (Cs) leader in Catalonia, Lorena Roldán, told Junqueras: ‘You are not martyrs, although you have come to play the victim, because you were the instigators [of the 2017 referendum].’

‘You are not telling the truth about what happened in the darkest days of 2017.’

Roldán, who asked Junqueras whether he ‘regrets’ of his acts whilst in government, walked away without waiting for Junqueras’ response when she finished her statement. ‘Won’t you wait for my response?’ he asked.

The Catalan Socialists (PSC) decided to not take part in the committee hearing as it was ‘a space of pro-independence propaganda’. The right-wing People’s Party (PP) also rejected attending ‘to avoid taking part in a political rally before the upcoming [Catalan] election campaign.’

When asked to testify, Jordi Turull called upon the Catalan pro-independence parties to keep their unity to ‘finalise’ the path towards a Catalan Republic. It comes a day after the two ruling Catalan parties clashed in the chamber over Quim Torra’s status as MP.

According to Turull, the suspension of self-rule in 2017 was ‘a bypass to take over democracy.’

Raül Romeva called for an amnesty for the jailed former leaders. ‘That’s the way major conflicts are resolved internationally,’ he said.

He spoke out in favour of dialogue and negotiation, but said that the political situation had to be taken seriously, insisting that the former leaders had been jailed in order to ‘silence and repress an ideology.’

He said that he was ‘convinced’ that sooner or later independence would happen and called the application of direct rule ‘the biggest mistake in democracy.’