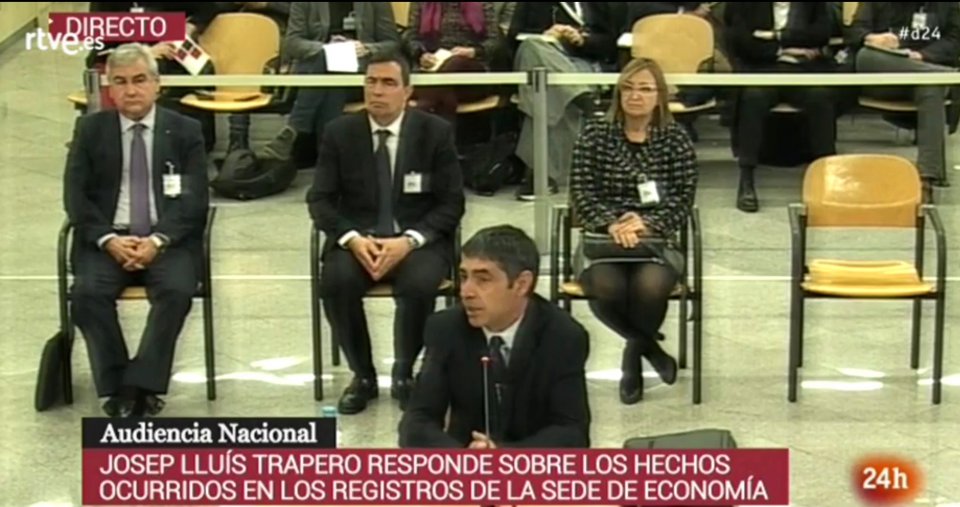 The trial of Josep Lluís Trapero, former head of the Catalan police (Mossos d’Esquadra) began at Spain’s National Court in Madrid on Monday. Trapero is charged with rebellion by Spain’s public prosecutor and could face up to 11 years in jail.

Three other Catalan officials are also on trial, alongside Trapero. Also charged with rebellion is the former Mossos director Pere Soler and former general secretary of the Catalan interior ministry César Puig, whilst former Mossos superintendent Teresa Laplana is charged with sedition.

On Monday one of the first issues raised was Laplana’s lawyer requesting for her not to attend the full trial, which is expected to last until mid-March, for medical reasons.

The rebellion and sedition charges against Trapero, Soler, Puig and Laplana are based upon them allegedly aiding the Catalan independence bid with a lack of action in preventing the 1 October 2017 referendum, as well as their handling of the protests during Spanish police raids in Barcelona on 20 September 2017.

Trapero was the highest ranking police officer in Catalonia until he was removed from his post on 28 October 2017, after the Spanish government under Mariano Rajoy imposed direct rule on Catalonia under Article 155.

On Monday, taking the stand to answer questions from the public prosecutor, the former Mossos chief Trapero defended his actions during the October 2017 independence push, as well as the actions of other members of the former Catalan police leadership.

Trapero was asked about his police force’s role during the demonstration on 20 September 2017 outside the Catalan government’s economy department in central Barcelona, which at the time was being raided by the Spanish police.

On that day, a few Catalan government buildings were being raided, with 15 officials arrested, in an attempt by the Spanish authorities to dismantle the logistics for the 1 October 2017 referendum.

Trapero explained that his duty was to make sure ‘the protest took place in good order and without it affecting either the people or the police operation’.

When asked why Trapero had several phone calls with Jordi Sànchez on the day of the September demonstrations, he said that he had tried to ‘mediate’ with the ANC leader of the protests.

He explained that such mediation ‘is the Catalan police model from 2013’ when dealing with demonstrations, although he also said that he had an argument with Sànchez during the calls. ‘I said that he had no right to tell me how to carry out a police operation.’

Trapero explained to the court that Spanish law enforcement officers had not warned the Mossos of their plans before raiding the public buildings. He also said that trying to make a cordon in a packed street with thousands of protestors would have meant ‘spreading’ the anger elsewhere.