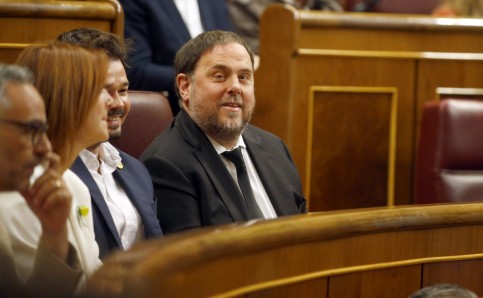 The Spanish Electoral Authority (JEC) will not allow jailed Catalan leader Oriol Junqueras to receive his accreditation as an MEP – despite a recent ruling by the Court of Justice of the European Union (CJEU).

On Monday, Spain’s Attorney General office issued a recommendation to the Supreme Court that Junqueras should be allowed out of prison in order to collect his credentials as an MEP.

This followed on from the ruling on 19 December by the CJEU in Luxembourg that the former Catalan vice-president had immunity after being elected as an MEP on 26 May – and that he should have been free to take up his seat following the election.

At that time, he was still in custody for the Catalan independence trial – and the CJEU claims that if Spain’s judiciary wanted to keep him behind bars, they should have asked the European Parliament for permission, which did not happen.

On 14 October the Spanish Supreme Court finally found Junqueras guilty of sedition and the misuse of public funds, and sentenced him to 13 years in prison.

The electoral board’s ruling came on Friday evening, minutes after ousting Catalonia’s president Quim Torra, and before the Supreme Court has its say over the issue after the Luxembourg judicial ruling.

The electoral authority is in charge of officially confirming who get seats after an election – yet the Supreme Court is Spain’s top judicial institution.