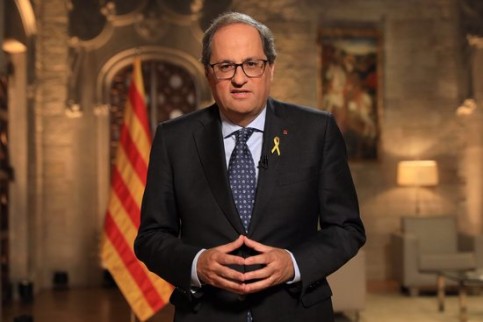 Catalan president Quim Torra has said that he will not accept the order from the Spanish Electoral Authority (JEC) ordering that he must be disqualified from his post. He called the ruling a ‘coup d’état’.

In a statement delivered at 9pm on Friday after an extraordinary cabinet meeting, Torra said, ‘I can only be barred from office by the Catalan parliament.’

Torra also said that he had asked the Catalan parliament speaker, Roger Torrent, to call an extraordinary plenary session for Saturday. It will be held at 5pm.

The disobedience is failing to remove signs in time that were in favour of the jailed Catalan leaders from the Catalan government’s headquarters during the electoral campaign, as ordered by Spain’s electoral authority (JEC).

The court had barred Catalan president Quim Torra from public office for 18 months and also fined him 30,000 euros for disobedience. However, the decision was not final and Torra has since appealed the ruling to the Spanish Supreme Court.

The JEC ruling overturns the provincial authority’s decision and sides with other appeals made by the right-wing People’s Party (PP), the Ciudadanos (Cs), and far-right Vox parties.

In its ruling, the electoral board did not mention the presidential post and only ordered that Torra be removed as an MP.  According to Catalan law, however, the president has to remain an MP in order to take office.

Torra’s party, Junts per Catalunya (JxCat), had requested that the ruling not come into effect until the Supreme Court confirmed his disqualification from public office.

Former Catalan president Carles Puigdemont was quick to react to the decision by the Spanish Electoral Authority. He tweeted, ‘another democratically elected President of Catalonia sacked by Spain not through ballotboxes but thanks to the deep state’.

The Spanish Electoral Commission just banned from office President @QuimTorraiPla.
Another democratically elected President of Catalonia sacked by Spain not through ballotboxes but thanks to the deep state.
This will not be over until Catalonia becomes a free country

Quim Torra’s vice president in the Catalan government, Pere Aragonès, also the senior official of the Esquerra Republicana (ERC) party, said: ‘We are with you, President, all of our support in fighting this aberrant electoral board decision.’

The Socialists (PSOE), facing an investiture debate in the Spanish Congress on Saturday in order to form a government led by Pedro Sánchez, took a skeptical approach on the electoral authority’s decision: ‘We have serious doubts that the electoral authority has the power to take such decision,’ said party’s vice president, Adriana Lastra.

Ciudadanos (Cs) leader, Inés Arrimadas, said: ‘While [Socialist leader] Sánchez pacts with the separatists that breaches laws, Cs uses all of its resources to make sure they are abided by.’

People’s Party (PP) leader Pablo Casado said Torra ‘must leave his post as Catalan president immediately, and if he doesn’t, [Spain’s leader] Sánchez must oblige him to do so by complying with his constitutional obligations.’

The far-right Vox party leader, Santiago Abascal, called on the Spanish government to ‘send the police to arrest Torra.’

On Friday evening the Spanish flag was lowered from the Catalan government’s building in Barcelona for about 15 minutes. Later, it was put back up.