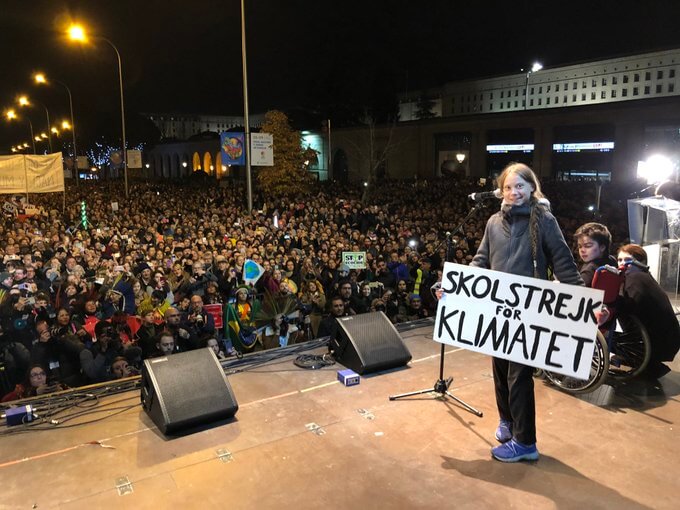 Greta Thunberg, the 16 year old Swedish climate activist, joined thousands of protestors in Madrid on Friday to demand urgent action on climate change from world leaders attending the COP25 conference in the city.

The rally she attended took place on the sidelines of the 12-day UN Climate Change Conference (COP25), which started in Madrid on Monday. The Spanish government offered to host the event after its original host, the Chilean capital of Santiago, withdrew last month due to riots over economic inequality.

Thunberg, who has become famous for spurring on a generation of young people to fight for the environment, was eventually forced to abandon the rally because she was mobbed by supporters and the media.

‘The current world leaders are betraying us and we will not let that happen anymore,’ the Swedish teenager said in a speech towards the end of the rally.

‘We say “that’s enough”. And change is coming, whether you like it or not because we have no other choice,’ she said.

‘We would love some action by people in power because people are suffering and dying due to the climate and ecological emergency and we can’t wait any longer,’ she had earlier told a news conference before the start of the rally.

Global leaders, activists and scientists from nearly 200 countries are attending COP25 to review and finalise goals set out in the 2015 Paris Agreement.

Overshadowing the event this year are failures of past conferences to transform goodwill into real policy change, making the stakes at this year’s event even higher. UN Secretary-General António Guterres has already warned leaders of ‘a point of no return’.

A UN report released last week states that even if greenhouse gas emissions are cut to meet the Paris Agreement levels, global temperatures will rise 3.2 degrees Celsius, exceeding the 1.5 degrees aim of the accord. Such a rise would be insufficient to avert the worst effects of climate change.

Greta Thunberg refuses to fly because of the carbon emissions involved, and she had been on her way to Chile when the COP25 venue was changed. She then headed back to Europe after being offered a ride on a catamaran. After finally arriving at the port in Lisbon on Thursday, she then made her way to Madrid for the Friday rally.

Thunberg tweeted an image of herself at the protest, stating ‘School strike week 68. They say more than 500,000 people showed up tonight in Madrid!’

In a separate tweet, she wrote: ‘500,000 people marched in Madrid last night. This is the beginning of change! The world is slowly waking up to the climate and environmental crisis. Soon the people in power can no longer get away with ignoring the science.’

Whilst the organisers claimed that half a million people attended the protest, however, local police estimated that around 15,000 had taken part in the rally itself. It was also being held on the first day of a four-day long weekend when many people leave Madrid.

Demonstrators beat drums and blew whistles as they made their way along the 5km route of the march from Atocha train station.

‘Speeches are not enough, we need concrete actions that target climate ambition that will resolve these problems,’ said Estefania Gonzalez, spokeswoman for Civil Society for Climate Action (SCAC) representing more than 150 Chilean and international groups

SCAC has been the driving force behind a week-long Social Summit for Climate Action, which begins on Saturday and runs parallel to the COP25, involving hundreds of events, lectures and workshops.

At the COP25 conference itself, there was also a Young and Future Generations Day on Wednesday.

Among the main topics discussed was how young people can lead climate action and accelerate implementation of the Paris Agreement.

‘Youth has played an enormous role, a fantastic role, throughout this year in order to raise awareness, in order to impress the need to take action urgently,’ said UN Climate Change Executive Secretary, Patricia Espinosa. ‘I want to recognise all of you, all of your voices. Each individual voice counts in making this possible.’

This year, more than ever, the COP25 conference delegates are being watched by a global climate strike movement, clearly inspired by Greta Thunberg, that has now mobilised millions of people across generations and on an unprecedented scale to demand government action.

PSOE and ERC meet for 3rd time – one month after election

UK advises against travelling to Spain – and imposes quarantine on return