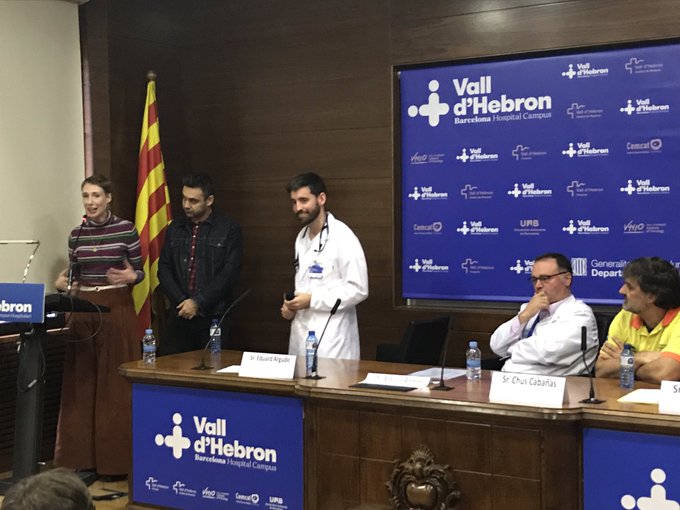 A British hiker has been resuscitated in Catalonia after suffering a six hour cardiac arrest, one of the longest ever recorded according to health officials.

‘It’s an exceptional case in the world,’ said Eduardo Argudo, a doctor at Barcelona’s Vall d’Hebron hospital, where a ground-breaking technique helped reintroduce oxygen in the patient’s blood long after the heart stopped beating.

On 3 November, 34 year old Audrey Mash and her husband got lost near the Vall de Núria, a popular mountain resort in the Catalan Pyrenees. Emergency services found the couple two hours after they called 112, with worsening weather conditions and Audrey already unconscious.

Having been caught off guard by a snowstorm, Audrey suffered hypothermia, falling unconscious before entering cardio-respiratory arrest.

‘I can’t remember anything about that weekend,’ said Audrey, who works as an English teacher in Barcelona. ‘It feels incredible that I survived it and I’m just really lucky to be here and be able to go on with my life. I’m just happy,’ she said.

Six hours later, having been rescued, she was finally revived in the Vall d’Hebron hospital thanks to the coordinated efforts of the fire service, the Medical Emergency Service (SEM) and the staff at the hospital.

Basic revival techniques were first applied at the Campdevànol hospital, over 110km north of Barcelona. She was then transferred by helicopter to Vall d’Hebron, where health professionals applied the Extracorporeal Membrane Oxygenation (ECMO) technique on a patient with severe hypothermia for the first time in Spain. By then, Audrey’s heart hadn’t been beating for three hours.

The hypothermia, paradoxically, had its benefits: whilst bringing the patient to the brink of death, it also preserved the tissue in her body for much longer than it would in regular temperatures.

‘Keeping her body at 18ºC, the hypothermia had a positive effect on her central nervous system, prolonging its ability to survive with a shortage of oxygen by ten times,’ said Chus Cabañas, the head of the Catalan emergency services in central Catalonia.

‘With a normal heart attack, we have 40 minutes to intervene. 40 times 10 means 400 minutes, that’s 6 hours to carry out a sustained rehabilitation,’ he said.

Rosalía … one of the stars of the 2020 Pirelli Calendar

UK advises against travelling to Spain – and imposes quarantine on return

‘Report thy neighbour’ if restrictions not followed, says Valencian minister