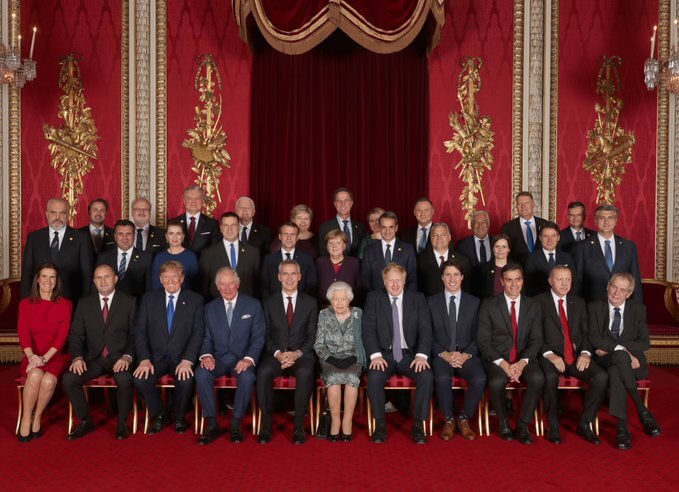 NATO leaders met in different groups in London on Tuesday before having dinner with The Queen at Buckingham Palace in a 70th anniversary show of unity – yet overshadowed by bitter rows.

French president Emmanuel Macron refused to withdraw his charge that the NATO strategy is ‘brain dead’, whilst US President Donald Trump continued to insist some countries were ‘delinquent’ in not paying their way.

In 2018, the Western allies’ get-together was rocked by Trump’s demand for greater European defence spending. This year it is Macron who has caused a stir.

The French president has called for a renewed strategic dialogue with Moscow and demanded that Turkey also explain itself over its assault (backed by Syrian rebels that Paris sees as extremists) on Kurdish forces and its purchase of the Russian S-400 air defence system.

Whilst Macron has been trying to shake up the agenda in recent weeks by demanding a review of NATO’s strategy, Trump arrived in London boasting that he had forced members to boost defence spending.

‘When I came in, I was angry at NATO, and now I’ve raised $130 billion,’ Trump said, referring to the sum that NATO secretary general Jens Stoltenberg says Canada and European members since 2016 will have added to defence budgets by next year.

‘And yet you still have many delinquent – you know I call them delinquent when they’re not paid up in full,’ Trump said.

Only nine of NATO’s 29 members have reached the target agreed at its 2014 summit to spend 2% of their GDP on defence before 2024.

Trump cited in particular Germany as falling short, spending only 1.2% of GDP.

‘Nobody needs NATO more than France,’ he said. ‘It’s a very dangerous statement for them to make.’

‘The common enemy today are the terrorist groups, as we mentioned, and I’m sorry to say that we don’t have the same definition of terrorism around the table,’ Macron said.

The row has set up a tense NATO summit that Stoltenberg hoped would be a 70th anniversary show of unity for the ‘most successful military alliance in history’, and to show that the West can stand up to challenges from Russia and China.

Merkel said she was ‘relatively optimistic’ after the meeting, but Macron warned that ‘not all clarifications were obtained and not all ambiguities were resolved’.

The real substance of this NATO summit is thin, with only one three-hour session planned where leaders are expected to sign off on a set of decisions already taken by NATO foreign and defence ministers.

COP25 focus: travel and tourism must transform to survive and thrive