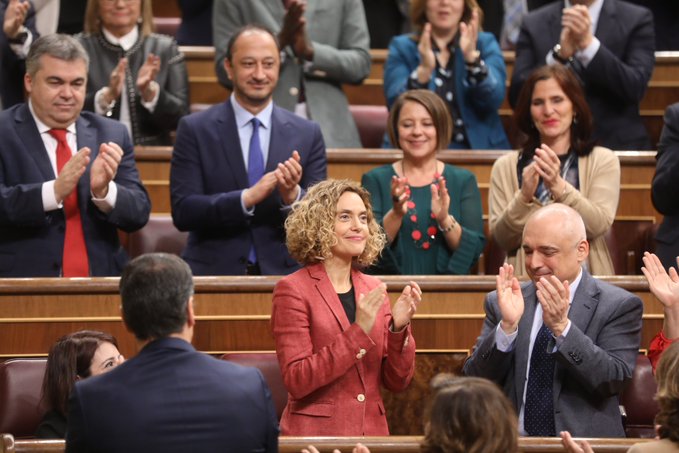 The Spanish Parliament reconvened on Tuesday, with MPs who won seats in the general election of 10 November taking the oath – yet still without a majority government or confirmation that acting prime minister Pedro Sánchez can be sworn in again to continue in the role.

The 350 MPs again elected socialist Meritxell Batet as the parliament speaker. She will have an audience with King Felipe VI later this week after which the king will once again start a round of meeting party leaders in the hope of choosing a candidate capable of forming a government.

During the parliament’s opening session on Tuesday, Batet was elected in as speaker in a second round of votes after falling short of obtaining an absolute majority in the first one.

Batet finally received 166 votes in favour (an absolute majority is at 176), ahead of the People’s Party’s Ana Pastor with 140. There were 29 non-valid votes and 11 were blank.

Before Batet was voted in, the oldest MP, the Socialist Agustín Zamarrón, acted as temporary speaker, and the youngest, the Esquerra Republicana (ERC) party’s Marta Rosique as secretary.

Rosique, wearing a T-Shirt reading ‘independence’ with the colours of the flags of Catalonia, the Basque Country and Galicia, mentioned the names of the Catalan jailed leaders that have not been allowed to run in the election when reading off the names of the MPs-elect.

Zamarrón gave her a warning and clarified that jailed Catalan leaders Oriol Junqueras, Jordi Turull, Josep Rull and Jordi Sànchez are not MPs.

Whilst Pedro Sánchez’s PSOE party won 120 seats in the election and have since signed a pre-agreement to form a left-wing coalition government with the Podemos party led by Pablo Iglesias, which won 35 seats – they are still short of the 176 majority needed in the Spanish Congress.

The biggest change that has arisen from the 10 November election is the resurgence of extreme Spanish nationalism in the form of the far-right Vox party who won 52 seats – now Spain’s third largest group.

Sánchez, therefore, needs the support of several smaller groups, as well as at least one of the Catalan pro-independence parties. The PSOE are currently trying to secure the abstention needed from the 13-seat secessionist Esquerra Republicana (ERC) party, provoking on-going accusations from the right-wing groups that Sánchez is doing deals with those who want to break up Spain.

After meeting for the first time last Thursday, ERC decided to maintain their ‘no’ vote, but welcomed the fact that the Socialists called the issue in Catalonia a ‘political conflict’.

The right-wing People’s Party (PP), the Ciudadanos (Cs), as well as Vox, adamantly refuse to support Sánchez or abstain. They have 151 seats between them.

It seems that Spain’s PSOE party will finally have to sit at the table with the Catalan president’s group, Junts per Catalunya (JxCat), for the first time since the 10 November general election.

The main Catalan pro-independence forces’ conditions for backing Sánchez include a commitment to allowing for the Catalan and Spanish governments to engage in dialogue over the independence issue without limiting the discussed topics.

ERC has also proposed that the agreement the talks reach be voted on by Catalans, whilst JxCat said the negotiations should include an international mediator as well as recognise the party’s leaders, current Catalan president Quim Torra and his predecessor, Carles Puigdemont, who is now in exile, as spokesmen.

Meanwhile, the other side in the Spanish left-wing deal, Podemos, seems to have taken a back seat in the talks with pro-independence parties.

Its leader, Pablo Iglesias, thinks it is likely that the new government is sworn in by Christmas, and praised the ‘efforts’ of ERC and the Socialists to reach a compromise. Their Catalan allies, En Comú Podem, urge the other Catalan forces to put the country’s interests ‘above partisan ones’.