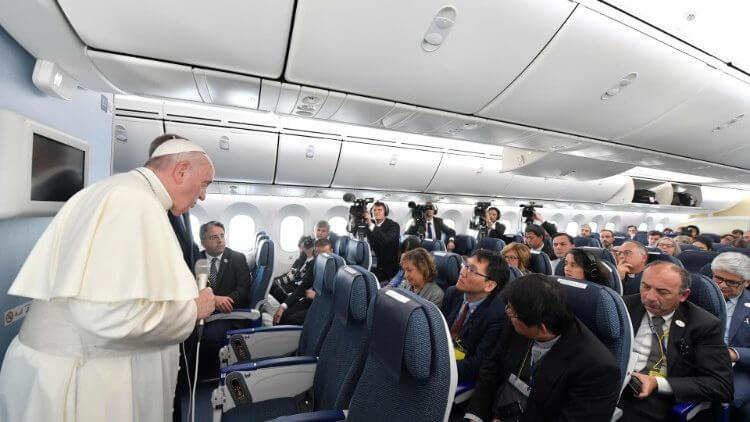 Pope Francis has called for ‘dialogue and peace’ in Spain, including it amongst ‘problematic’ countries – yet without directly mentioning the Catalan political crisis.

During an in-flight press conference aboard a plane taking him back to Rome from Japan, the Pope was first asked about the situation in Hong Kong. However, he replied mentioning other ‘problematic’ areas, including Chile, France (and the country’s yellow vest protests this year), Nicaragua, and also Spain.

‘It’s not just Hong Kong,’ Pope Francis said. ‘Think about Chile, think about France, democratic France: a year of yellow jackets. Think of Nicaragua, think of other Latin American countries that have problems like this, and even some European countries. It’s something general. How does the Holy See handle this? It calls for dialogue, for peace.’

‘But it’s not only Hong Kong,’ Pope Francis continued. ‘There are various problematic situations that I am unable to evaluate at the moment. I respect peace and I ask for peace for all these countries that have problems, Spain too. It is better to put things in perspective and to call for dialogue, for peace, so that problems can be resolved.’

The Pope also spoke strongly against the use of nuclear weapons, referring to them as ‘immoral – not only their use, but also possessing them: because an accident or the madness of some government leader, one person’s madness can destroy humanity.’

Iglesias the ‘referee’ in 2nd TV debate as others clash