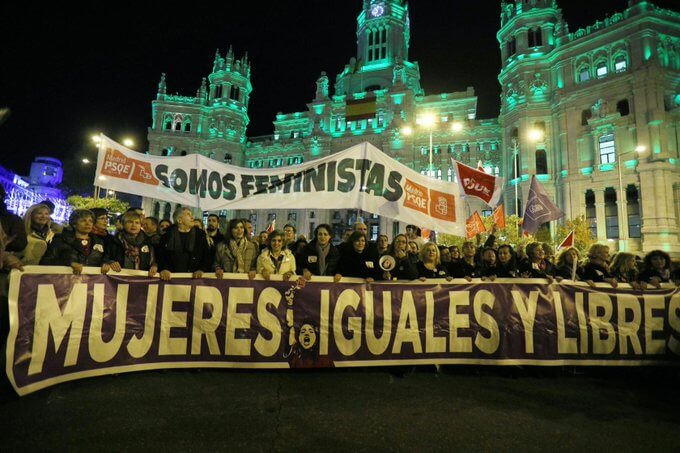 Tens of thousands took to the streets on Monday across Spain for the International Day for the Elimination of Violence against Women, with various events taking place throughout the day to raise awareness.

Many protests also targeted the Spanish far-right Vox party, for its refusal to recognise the issue of gender violence.

About 8,000 people took part in the march in Madrid, according to the police. In Barcelona, around 10,000 people participated, with Barcelona City Council having launched a campaign and website detailing the resources available to women suffering gender-based abuse. In Valencia, the number of protesters was estimated at 20,000 – and a further 4,000 in Seville.

The Vox party has been severely criticised for its refusal to accept the issue of gender violence – and an issue that has claimed more than 1,000 lives in Spain since records began in 2003. The far-right party has even been using its new position in local governments to block declarations against gender violence.

On Monday, a gender violence victim Nadia Otmani, who was shot three times by her brother-in-law whilst defending her sister, confronted Vox politician Javier Ortega Smith from her wheelchair during an event in Madrid. ‘Don’t use gender violence to do politics,’ she cried. Ortega Smith refused to look her in the eye.

On Monday, on the same day as the International Day for the Elimination of Violence against Women, a 26-year-old woman was killed on by her male partner in Tenerife, in Spain’s Canary Islands.

The number of men arrested for gender-based violence in Catalonia is up 2.6% compared to the same time last year, with a total of 4,538 detentions according to the latest Catalan Mossos d’Esquadra police statistics.

There has also been a 43.8% increase in reported instances of attempted murder – from 16 to 23 – and a 42.9% increase – from 28 to 40 – of sexual abuse in intimate relationships this year, amongst the 11,103 gender-based violence reports filed accounting for 19,868 criminal offenses thus far.

In 2019, 8 women have been murdered in Catalonia – leaving 11 children orphaned.