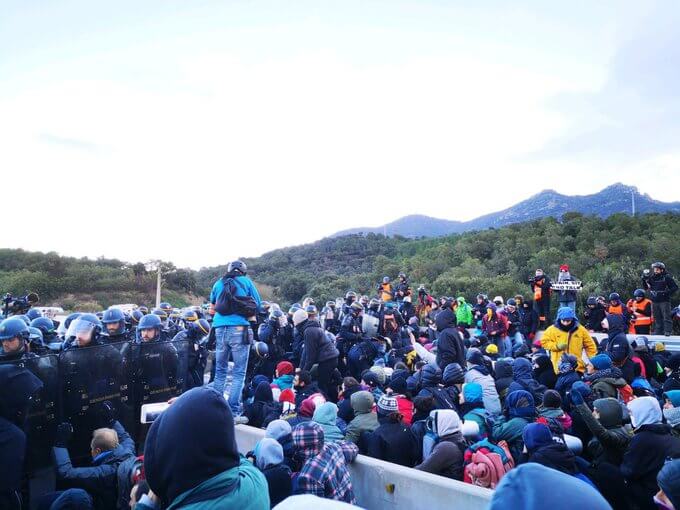 Early on Tuesday morning, French police used pepper spray to start removing protestors who had been blocking the AP-7 motorway at the French border, after the Tsunami Democràtic group of activists occupied the road near La Jonquera on Monday.

Police from the Catalan Mossos d’Esquadra, the Spanish National Police and the Guardia Civil have also joined in the operation to remove protestors, and specifically from the N-11 national road, adjacent to the AP-7 motorway.

So far, reports claim that 19 people have been arrested – 18 by the French police and one arrest by the Mossos.

During Monday night, videos posted on social media portrayed a festive atmosphere as the protestors camped out on the AP-7 motorway at La Jonquera, with people singing, dancing and lighting bonfires to keep warm.

Tsunami Democràtic have since urged all their followers to blockade the Spanish border with France at Behobia in the Basque Country, through an ‘Operation Snail’ of driving slowly, at 6pm on Tuesday.

‘Catalunya and Euskal Herria [Basque Country] are living an unsolved political conflict with the Spanish state’, claim the Tsunami Democràtic. ‘While citizens fight and claim democratic and fundamental rights, Spain only offers imposition and repression.’

On Monday morning, the anonymous group of activists had said that blocking the AP-7 motorway was planned to be a three day protest – and something they’d previously warned would be their ‘most ambitious’ action to date.

The protest had followed on from Sunday’s inconclusive general election results – the group’s latest action to put pressure on the Madrid authorities to ‘sit and talk’ and negotiate a political solution for the Catalan crisis, as well as demand the release of imprisoned pro-independence leaders.

During Monday, they had called on people to go to the blocked border point, stating on Twitter that the goal was to call upon the international community ‘to make the Spanish state understand that the only way is to sit down to talk’.

‘Today we start a new way of protest, using technology to defend rights and collective freedom, instead of repression and control,’ said one of the group’s many Tweets, posted in English.

They had also constructed a stage in the middle of the motorway, and one of Catalonia’s most famous singer-songwriters, Lluís Llach, performed there on Monday during the afternoon.

Llach’s most famous song, ‘L’Estaca’, has become the unofficial anthem of the Catalan independence movement. He was also a member of the Catalan Parliament from September 2015 until January 2018.