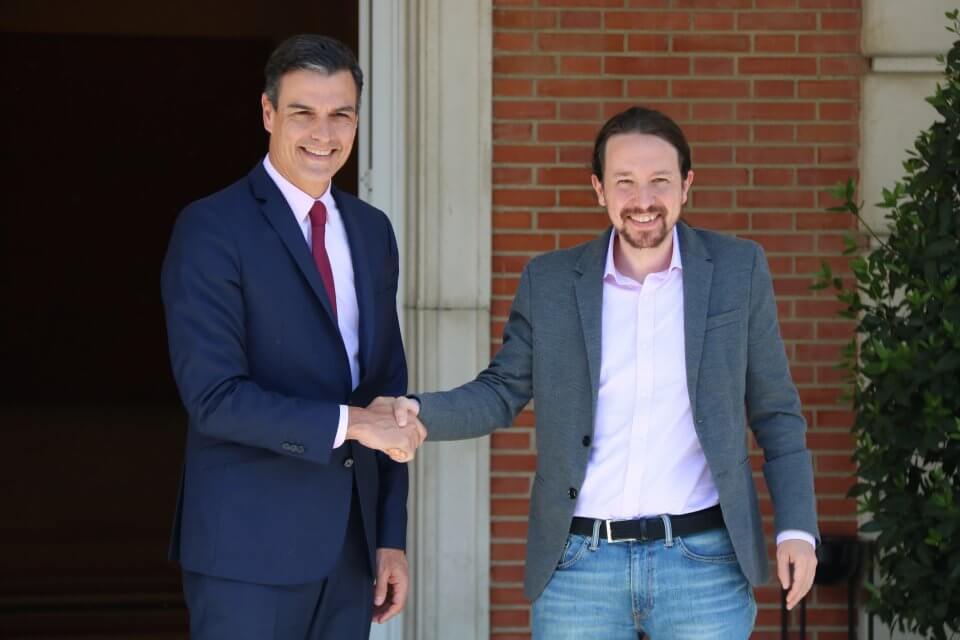 Despite over 6 months of failed discussions between the parties to form a government following the 28 April election, the two leaders struck a deal less than 48 hours after Sunday’s vote.

Talks between the leaders of PSOE and Podemos reportedly began on Monday night in total secrecy.

The combination of the seats that both parties won in Sunday’s election is still not enough on its own to secure an overall majority in the Spanish Congress, and they will still need to seek support from other parties for a coalition government to be confirmed, and possibly the abstention of either Esquerra Republicana (ERC) party or Ciudadanos (Cs).

In Sunday’s election the PSOE led by Pedro Sánchez won 120 seats (compared to 123 won in the April election),  but again fell short of an overall majority. The right-wing People’s Party (PP) led by Pablo Casado won 88 seats, recovering from the disastrous result of just 66 seats in April.

The left-wing Podemos party led by Pablo Iglesias won 35 seats, down from 42 in April – due mainly to the new breakaway Más País party, led by Íñigo Errejón, winning 3 seats.

The biggest news of Sunday, however, was that the far-right Vox party won 52 seats (up from 24 won in April), making it Spain’s third largest party – and that the Ciudadanos (Cs) party was left decimated, winning just 10 seats (down from 57 in April). The leader of Cs, Albert Rivera, has since resigned from the leadership and also quit politics.

At just before 2.30pm on Tuesday, Pedro Sánchez and Pablo Iglesias appeared before the media to sign their pre-agreement for a coalition government, before they both made statements.

Sánchez said that it would be a ‘progressive government made up of progressive forces that are going to work for progress’. He added, ‘There is no room for hatred between Spaniards’ and said that the government would last ‘for four years, the entire term’.

Iglesias said, ‘As I said on election night after hearing the results, what was a historical opportunity in April has become a historical necessity.’ He went on to say that he was ‘pleased to announce today, together with Pedro Sánchez, that we have reached a preliminary agreement to create a progressive coalition government that combines the experience of the PSOE with the courage of Unidas Podemos.’

The agreement is expected to include Pablo Iglesias assuming the role of deputy prime minister, and it also includes ‘dialogue’ with the Catalan pro-independence groups ‘within the bounds of the existing constitution’.

After the signing, Iglesias said ‘it’s an honour to be able to work in the country’s government to improve the lives of our compatriots. Sánchez knows that he can count on our loyalty.’

In Catalonia, the government welcomed that talks between the two party leaders had resumed, although spokeswoman Meritxell Budó regretted they had not reached an agreement after the April election, in order to avoid more instability and the far-right in the institutions’.

Budó also said that ‘we’re pleased that Sánchez has come round to dialogue, we’ll see what happens.’

The leader of the PP, Pablo Casado, promised ‘firm and robust’ opposition to the coalition government, saying that the ‘PP will be with Spaniards to represent an alternative future, far from extremists, pro-independence supporters, and Podemos radicals.’

Clara Ponsatí to oppose extradition ‘robustly’, as ‘not a crime to vote for independence’