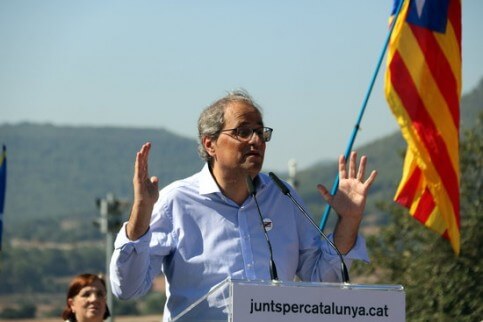 Catalan president Quim Torra has denied ‘any link’ with detained activists held on terrorism charges and who have implicated him in testimonies regarding a plan to occupy the Catalan Parliament. Torra has also questioned the ‘conditions’ under which their declarations were made, and demanded that their their right to defence is preserved.

Ferran Jolis, one of the seven members of the Committees in Defence of the Republic (CDRs) protest groups detained last September by Spanish police on terrorism charges and subsequently imprisoned, has testified of a plan to lock Quim Torra inside the Catalan Parliament for a week on ‘D day’ – referring to the day when the long-awaited verdict on the 2017 referendum case came out.

Jolis also testified that the operation could have been plotted by president Torra himself, or by a so-called ‘Catalan National Centre of Intelligence.’

A report by the Guardia Civil police said that the detainees were part of a faction within the CDR known as the Tactic Response Team (ERT, for its Catalan acronym), which they described as an ‘underground and well-organised group willing to carry out radical actions.’

According to police reports, they reached an ‘advanced stage’ in ‘making explosive or incendiary materials’, with a ‘superior goal leaning towards the independence of Catalonia, endangering the physical integrity of people and goods’.

During the police investigation, several tapped phone conversations were transcribed and attached to court documents. According to the police, two of the jailed activists discussed a plan to occupy the Catalan Parliament in Barcelona with ‘the Catalan government inside’ and to ‘resist during one week’.

In the conversations, one of the group implicated Torra and his predecessor Carles Puigdemont, referring them by the nicknames ‘Gandalf’ and ‘Lisa’. In a video of one of the interrogations by police which was leaked to the media, one of the detainees said that the plan ‘came from the presidency … from Torra’.

The defence teams of the imprisoned CDR activists have rejected the claims. ‘There is no firm element’ of evidence ‘that upholds the accusations,’ one of the lawyers said.

Xavi Pellicer, defending the activists, said that the allegations are ‘politically motivated’ and that ‘the accusations of terrorism do not hold up by any means’. He also claimed the suspects made their statements to police following ‘threats and coercion’.