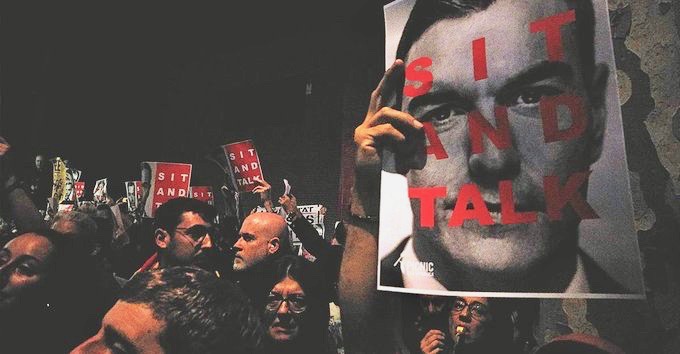 Pedro Sánchez was greeted by Catalan pro-independence protestors when he visited Catalonia on Wednesday for a Socialist party (PSOE) pre-election campaign event held in Viladecans, just south of Barcelona.

The Pícnic per la República civil protest group called a demonstration outside the venue holding the meeting to call on Sánchez to ‘Sit and Talk’, the slogan for the campaign promoting dialogue between Spain and Catalonia.

On social media, the protest group asked protestors to bring chairs and drums to show Sánchez that ‘he is not welcome in Catalonia’, but also to call on the acting prime minister to engage in dialogue with the Catalan government.

‘He is a president who was an accomplice in 155 [referring to Article 155 and the suspension of Catalan self-rule in 2017], and he and his government are responsible for police repression,’ said the message, in reference to the authorities’ handling of recent protests.

The Committees in Defence of the Republic (CDRs) protest network announced its support for the demonstration, calling on protestors to bring a ‘yellow whistle’ [yellow is symbolic of jailed Catalan independence leaders] and to turn Viladecans into ‘a prison’.

On Wednesday evening, CDR also called on demonstrators to take to Jardinets de Gràcia in the centre of Barcelona and bring chestnuts for a ‘Castanyada against Spain’. A Castanyada in Catalan means eating chestnuts, a seasonal food traditionally paired with sweet potato enjoyed around the end of October and beginning of November.

Sánchez arrived in Catalonia for the campaign meeting at the same time that his PSOE party were coming under fire, accused of removing any mention of its commitment to federalism and its recognition of the nationalities within Spain from its election manifesto.

With a new Spanish general election set for 10 November – the fourth in four years – some media outlets reported that the so-called Granada and Barcelona declarations that the party officially adopted in 2013 and 2017 respectively had been removed from the manifesto.

On Wednesday morning, Sánchez told a Spanish TV channel that the final document ‘has not yet been finished’ and that the two points would appear in the party’s final manifesto for the upcoming election, which was due to be approved at the event in Viladecans.

‘The problem is that documents are made public before they have been finished,’ Sánchez told Antena 3, adding that the programme without the two points had been ‘leaked’ and that his party can ‘sometimes be too transparent’.