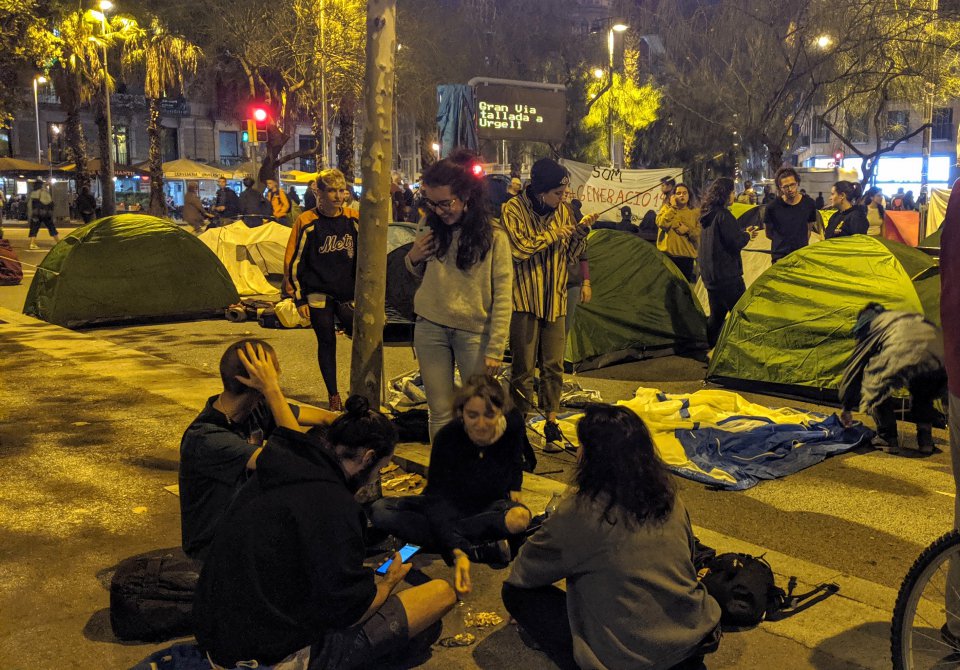 Around 40 tents were pitched in Barcelona’s Plaça de la Universitat square on Wednesday night, as over 200 students calling themselves the ‘October 14 Generation’ began an indefinite protest camp, demanding the return of ‘everything that’s been taken from us’ in reference to ‘rights and freedoms’. They also protested against recent police violence during demonstrations in Catalonia.

Many joined the protest in the square during the evening, where a concert was also held.

Made up of mostly university students, the protestors hope other youth organisations will join the camp and add their voices to their call for ‘responsibility’ from political leaders in guaranteeing a ‘dignified future’ for young people.

They labelled themselves the ‘October 14 Generation‘ in reference to the day Spain’s Supreme Court sentenced nine Catalan independence leaders to prison for up to 13 years, with the protestors condemning the sentencing of the ‘political prisoners’.

They also condemn the violent conduct of police in the recent protests and disturbances in response to the jailing of the leaders, vowing to occupy the square as long as ‘the repression’ by the authorities continues.

The protest comes a day after many students began an indefinite strike in various universities around Catalonia to also protest against the sentencing, which on Tuesday saw access to classrooms blocked on some campuses.

The students taking part in the strike are also calling for the option to choose a single end-of-term exam rather than being subject to a continual assessment grading system.

The university strike began early on Tuesday morning with a number of protest actions carried out by some students from different Catalan universities.

Students from Barcelona’s Autonomous University (UAB) blocked southbound traffic for a time on the AP-7 and B-30 motorways around 11am.

Barcelona’s Pompeu Fabra University (UPF) was the university that was most affected by the strike, where groups of students formed pickets to prevent students not participating in the stoppage from going to class.

After moments of tension between opposing groups, the university authorities advised students not to go to class until the situation had returned to normal.

However, attendance to classes in the University of Barcelona (UB) was fairly normal, and the strike was only noted in classes in the Fine Arts faculty.

Most universities responded to the students’ demands for a single end-of-term exam by announcing the possibility of offering alternative systems of evaluation.

The UPF offered a single evaluation for those students who demand it, while the UAB and UPC said they would debate the possibility of introducing the option this week.

Pedro Sánchez greeted by ‘Sit and Talk’ protestors in Catalonia