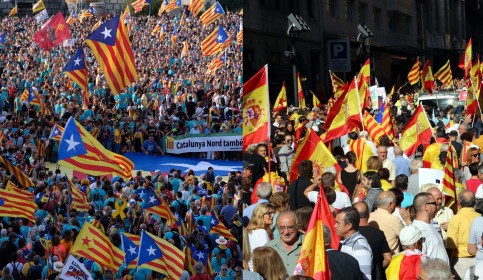 This weekend in Barcelona will see two separate protests that define the conflict between those who want an independent Catalonia, or at least the chance to choose the country’s political future, and those who support the unity of Spain and think that Catalonia is better off where it is.

Last weekend saw over half a million people protest in Barcelona against the sentencing of Catalan independence leaders to prison, as the Marches for Freedom that had crossed the region, in addition to the general strike called by pro-independence unions.

Yet, Barcelona will also host another demonstration the following day, as the largest platform against Catalan independence, the Societat Civil Catalana (SCC), holds a protest alongside unionist political parties to call for an end to the push for independence.

Despite being polar opposites, both sides share a rejection of violence for political ends. The pro-independence camp has always protested peacefully, and distanced itself from recent unrest over the verdict, whilst the SCC says its demonstration is ‘to say enough to violence’.

Both are also capable of bringing large numbers of supporters onto the streets. This year’s La Diada (Catalan National Day) on 11 September drew 600,000 pro-independence protestors, whilst in October 2017 a march organised by SCC drew at least 300,000, both according to local police estimates.

Under the slogan ‘Let’s mobilize for freedom,’ Òmnium and ANC have called Saturday’s demonstration to ‘defend fundamental rights’ and to reject Spain’s ‘repression on the streets.’ The march is scheduled to begin at 5pm on Barcelona’s Marina avenue.

As for the SCC demonstration on Sunday, its slogan will be ‘Stop procés, stop violència,’ in reference to the independence push and the disturbances in response to the sentences. The rally is scheduled to begin on Barcelona’s Passeig de Gràcia avenue at 12pm.