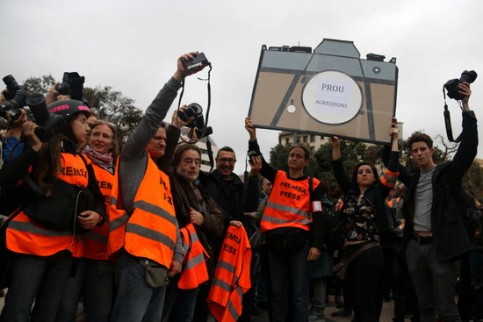 At least 65 journalists have been injured whilst covering protests against the verdict and sentence of the Catalan Trial so far, with statistics showing that roughly 75% of those incidents have come from police officers, according to Media.cat.

In the vast majority of cases, the writers, photographers and presenters were attacked despite being easily identifiable by the bright orange coloured vests and armbands that signify accreditation.

Rubber bullets have been fired and rocks thrown at identifiable journalists, as well as various police charges have been reported.

On Tuesday, a demonstration took place in Plaça Catalunya in the centre of Barcelona to denounce the aggressions against journalists. On the organisers’ website, they argue that attacks from police are intended to intimidate reporters to distance them from the ‘abuses’ the police forces can commit.

‘Without journalism, there is no democracy,’ a joint statement from journalists’ associations in Catalonia read. ‘Every time someone blocks the work of a journalist they are going against the system of democracy.’

Sira Esclasans was covering the chaos on the streets of Barcelona last week when she was shot in the leg with a foam bullet. ‘I was with a group of journalists clearly identifiable in between the line of police and protesters,’ she explained. ‘They shot a foam bullet directly at my leg. A colleague helped me out of the risk area, and from there I went home because I couldn’t stand properly on my leg,’ she said.

Sergi Alcácer was another photojournalist covering last week’s riots when he was hit by police. ‘The police started hitting a colleague of mine, I took out my phone to begin recording it,’ he said. ‘Then another officer saw me and started hitting me. Thankfully I had my backpack on which protected me from the blows otherwise, I would have really hurt my back.’

Human rights group Amnesty International denounced the ‘excessive use of force’ that police have been employing, and published a report that describes scenes of excessive use of force ‘including inappropriate and unjustified use of batons and other defensive equipment against people who posed no risk, including journalists.’

Amnesty International’s director for Europe Marie Struthers called the high number of people, demonstrators as well as journalists, injured at protests ‘worrying’ and said that the ‘Spanish and Catalan police’s excessive use of force was not acceptable.’

The Council of Europe has also expressed its concern regarding the ‘disproportionate use of force and inappropriate use of anti-riot weapons by polic’ during last week’s protests.