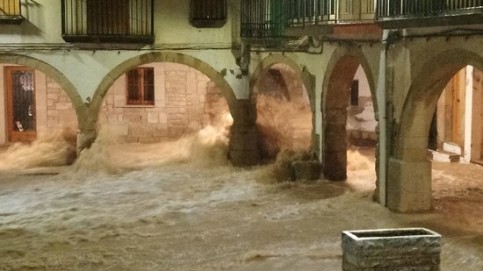 On Wednesday morning 40 roads remain blocked and various train lines are without service.

A 70-year-old man was found dead on the beach at Caldes d’Estrac, north of Barcelona, on Wednesday morning, after torrential waters carried him off while he attempted to retrieve his car in the nearby town of Arenys de Munt.

Meanwhile, a 69-year-old woman and her son aged 42 are missing after the Francolí river swept their bungalow away in Vilaverd, in southern Catalonia. A rescue operation to find the pair involving helicopters, divers and dogs began at first light.

Several train services were suspended, and close to Vinaixa, in the Garrigues area, a goods train was derailed after a section of railway had sunk into the ground. The driver was taken to hospital but later discharged.

At 10.30am, Catalonia’s traffic service, Trànist, announced that 46, mostly local, roads were out of action.

In Espluga de Francolí, in the south, dozens of fallen trees blocked the roads around the town.

Some 15 schools around Catalonia had to remain closed due to the effects of the bad weather, while some 30 school bus routes were suspended, particularly in the western region of Lleida.

Firefighters, who responded to some 2,000 emergencies, evacuated at least 42 people from their homes as some buildings collapsed due to the heavy rains. Meanwhile, some 24,000 households were left without any power.

The Catalan government’s Civil Protection agency raised the Inuncat flood plan to emergency levels after ‘serious’ weather related incidents were reported at 11.45pm on Tuesday night. By 9.30am on Wednesday the 112 emergency line had received over 3,000 calls.

Barcelona has also been affected, with local firefighters answering 259 emergency calls in the early hours. Later in the morning, metro trains could not stop at the Paral•lel station because of water on the tracks, while many traffic lights in the center had stopped working.