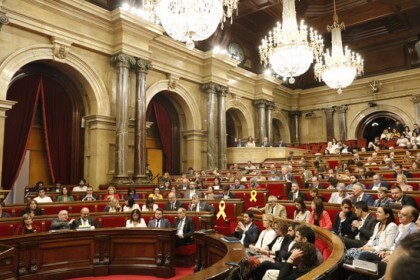 Quim Torra, the Catalan president, has insisted on calling Spain’s acting prime minister Pedro Sánchez to engage in ‘unconditional dialogue and propose political solutions’ in a statement to the press on Tuesday, after the Catalan government passed an agreement to pressure him to ‘sit and talk’ with Catalan institutions.

Appealing to Sánchez’s ‘statesmanship’ in trying to encourage him to speak to him about the issues Catalonia currently faces, Torra also stated that he would always defend the ‘right to self-determination’.

The Catalan president described how he has attempted to speak to Sánchez for four days consecutively, and has not yet been able to get through to him.

Madrid has repeatedly claimed that Torra must condemn the protests that took place following the Supreme Court’s announcement of the jailed independence leaders’ sedition sentences ‘without nuances’ and in ‘an expressive way’.

Earlier on Tuesday, the three main pro-independence parties came together in the Catalan Parliament with a joint motion to reiterate previous resolutions defending Catalonia’s self-determination and sovereignty, as well as admonishing Spain’s King Felipe VI.

The resolutions originally passed by the chamber on 25 July were challenged by the Spanish government in the Constitutional Court, which partially suspended them in early October, warning of potential legal consequences if its ruling was disobeyed.

It is the first agreement between the Junts per Catalunya (JxCat), Esquerra Republicana (ERC) and CUP pro-independence parties since the Spanish Supreme Court sentenced nine Catalan leaders who organised the banned 1 October 2017 referendum to jail terms of between nine and 13 years for sedition.

The initiative comes after some recent high profile divisions and differences among the pro-independence parties, who between them have a narrow majority in the Catalan Parliament.

Tuesday’s motion says that parliament ‘reiterates and will reiterate as many times as MPs choose the disapproval of the monarchy, the defence of self-determination and the affirmation of the sovereignty of the people of Catalonia to decide their political future.’