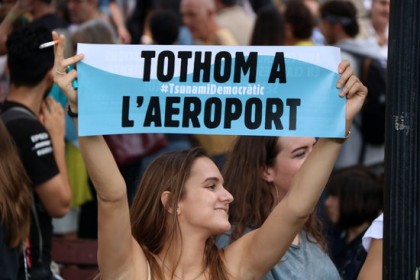 Sources in the high court said that the charges are similar to those of which seven activists from the Committees in Defence of the Republic (CDR) are accused.

Among the terror charges the seven CDR activists in custody face are belonging to a terrorist organisation, making and possession of explosives, and conspiracy to cause havoc.

Spain’s Guardia Civil police began closing down websites associated with the protest network on Friday afternoon, on the orders of the Spanish court.

Asked to comment on the matter, the European Commission said that Spain was responsible for ‘finding the right balance between guaranteeing freedom of expression and upholding public order and ensuring security, as well as protecting from illegal content.’

Tsunami Democràtic (Catalan for Democratic Tsunami) is the pro-independence group that organised the protest against the jailing of Catalan leaders on Monday that brought Barcelona El Prat airport to a standstill.

Claiming over 330,000 subscribers to their Telegram group, the anonymous network says its aim is to force the Spanish authorities to negotiate a binding self-determination referendum via non-violent protest.

The judge who ordered the closure, Manuel García Castellón, is also dealing with the case of seven activists from the Committees for the Defense of the Republic accused of terrorism.

However, soon after the websites were blocked by police on Friday, visitors to the site were redirected to an alternative site through another address: https://democratictsunami.eu.

On social media, the group also recommended people to download its app to avoid what it called ‘censorship’ and also provided a link to follow it on the Telegram app.

Following the airport protest on Monday, Spain’s acting interior minister, Fernando Grande-Marlaska, warned that ‘sooner or later we will find out who is behind it’.

Before the websites were blocked, the minister said progress had been made in identifying ‘the intellectual authors’ behind this week’s protests, including Tsunami Democràtic.